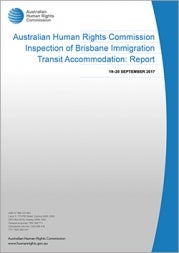 Facilities in the residential compound of the BITA are generally of an adequate standard for short periods of detention. However, the BITA is not an appropriate facility for people who are likely to be in detention for extended periods of time.

The Fraser compound at the BITA is small, crowded, offers very limited privacy and lacks adequate access to outdoor exercise. The Commission considers that the Fraser compound is not an appropriate place of immigration detention, even for short periods of time or for a smaller number of people.

Feedback on staff at the BITA was generally positive.

The use of restraints on people detained at the BITA in some cases may have been excessive.

The Commission did not identify major or systemic concerns regarding the provision of health care at the BITA. However, there is some level of concern among people detained at the BITA about health care and the impact of detention on mental health. \

The Commission is particularly concerned about the circumstances of vulnerable individuals who had significant mental health issues (including people subject to third country processing) and of pregnant women detained at the BITA. These groups should be considered as priorities for release into alternative community-based arrangements.

The policy prohibiting all mobile phone use may restrict access to external communication to a greater degree than is necessary to ensure safety and security, particularly in a lower-security facility like the BITA.

The Commission welcomes the establishment of dedicated facilities for visits at the BITA. A number of the people interviewed by the Commission reported that they had been in detention for a relatively short period of time. However, the some had been detained for prolonged periods of time, and in some cases had spent very long periods of time at the BITA.