The Forgotten Children: National Inquiry into Children in Immigration Detention (2014) 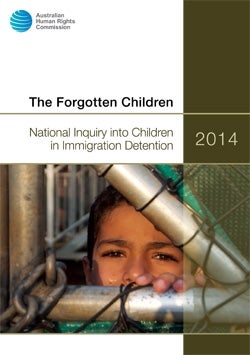 Australia currently holds about 800 children in mandatory closed immigration detention for indefinite periods, with no pathway to protection or settlement. This includes 186 children detained on Nauru.

Children and their families have been held on the mainland and on Christmas Island for, on average, one year and two months. Over 167 babies have been born in detention within the last 24 months.

This Report gives a voice to these children.

It provides compelling first-hand evidence of the negative impact that prolonged immigration detention is having on their mental and physical health. The evidence given by the children and their families is fully supported by psychiatrists, paediatricians and academic research. The evidence shows that immigration detention is a dangerous place for children. Data from the Department of Immigration and Border Protection describes numerous incidents of assault, sexual assault and self-harm in detention environments.

Importantly, the Government recognises that the fact of detention contributes significantly to mental illness among detainees.

The aims of the Inquiry have been to:

There is nothing new in the finding that mandatory immigration detention is contrary to Australia’s international obligations. The Australian Human Rights Commission and respective Presidents and Commissioners over the last 25 years have been unanimous in reporting that such detention, especially of children, breaches the right not to be detained arbitrarily. The aim of this Inquiry was not to revisit the Commission’s settled view of the law, but rather to assess the evidence of the impact of prolonged detention on children.

As the medical evidence has mounted over the last eight months of the Inquiry, it has become increasingly difficult to understand the policy of both Labor and Coalition Governments. Both the Hon Chris Bowen MP, as a former Minister for Immigration, and the Hon Scott Morrison MP, the current Minister for Immigration, agreed on oath before the Inquiry that holding children in detention does not deter either asylum seekers or people smugglers. No satisfactory rationale for the prolonged detention of children seeking asylum in Australia has been offered.

Australia is unique in its treatment of asylum seeker children. No other country mandates the closed and indefinite detention of children when they arrive on our shores. Unlike all other common law countries, Australia has no constitutional or legislative Bill of Rights to enable our courts to protect children. The Convention on the Rights of the Child is not part of Australian law, although Australia is a party. The Convention is, however, part of the mandate of the Australian Human Rights Commission to hold the Government to account for compliance with human rights. This Convention accordingly informs the findings and recommendations made by the Inquiry.

This Report is fundamentally different from previous reports by the Commission as it focuses in both a qualitative and quantitative way, on the impact of immigration detention on children as reported by children and their parents. The Commission conducted interviews with 1129 children and parents in detention, providing a much needed foundation for objective research findings. Standard questions were used in all interviews so that the reported impacts are measurable.

The evidence documented in this Report demonstrates unequivocally that prolonged detention of children leads to serious negative impacts on their mental and emotional health and development. This is supported by robust academic literature.

It is also clear that the laws, policies and practices of Labor and Coalition Governments are in serious breach of the rights guaranteed by the Convention on the Rights of the Child and the International Covenant on Civil and Political Rights. The United Nations High Commissioner for Human Rights also suggests in his opening address to the Human Rights Council that Australia’s policy of offshore processing and boat turn backs is ‘leading to a chain of human rights violations, including arbitrary detention and possible torture following return to home countries’.

Australia’s policy of prolonged and indefinite detention of asylum seeker children should be understood in context. Last year saw tumultuous global and regional conflict and persecution, leading to an unprecedented flow of boat arrivals in Australia. The Australian community has been shocked by the tragic deaths of over a thousand asylum seekers taking the perilous voyage by sea, including at least 15 children between 2008 and 2013.

In an attempt to stop illegal people smuggling and drowning at sea, the Labor Government reintroduced offshore transfers to Nauru and Manus Island. As from 13 August 2012, that Government froze the assessment of claims to refugee status under the ‘no advantage’ principle, leaving about 31,000 asylum seeker families and children in a legal black hole in which their rights and dignity have been denied, in some cases for years. The current Government has maintained this policy.

The Commission acknowledges that the surge in asylum seekers arriving in Australia by boat in 2013 placed considerable pressures on the Department of Immigration and its resources, especially on Christmas Island. The Government’s policy, ’Operation Sovereign Borders’, under which Australian authorities use force to intercept and turn back boats, has prevented asylum seekers from reaching our shores. The consequence is that it has become possible to focus on those 5,514 asylum seekers who are currently detained in Australia and on Nauru and Manus Island (as of 30 September 2014).

Commission decision to conduct an Inquiry

As the federal election was imminent, I decided to await the outcome of the election, and any government changes in asylum seeker policy, before considering launching an Inquiry. By February this year, it became apparent that there had been a slowing down of the release of children. Over the first six months of the new Coalition Government the numbers of children in detention remained relatively constant. Not only were over 1000 children held in detention by February 2014, but also they were being held for longer periods than in the past, with no pathway to resettlement.

In these circumstances, I decided to exercise the Commission’s powers under the Australian Human Rights Commission Act 1986 (Cth) to hold a National Inquiry into Children in Immigration Detention.

The Inquiry, conducted over eight months from February to October 2014, has adopted a rigorous methodology, both qualitative and quantitative, to ensure that our statistics and findings stand up to scrutiny as accurate, fair and balanced.

We asked children and their families to answer a standardised questionnaire about the health impacts of detention, providing data from 1129 participants. Five public hearings were held, with 41 witnesses, including the Hon Chris Bowen MP and the Hon Scott Morrison MP. A total of 239 submissions were received from schools, medical service providers and NGOs, including the Refugee Advice and Casework Service, ChilOut and Amnesty International. Focus groups have been held with young adults who, as children, were detained, and can attest to the continuing impact of their detention.

Vital to this Report has been the inclusion of internationally recognised medical experts in all detention centre visits. A range of different child psychiatrists, paediatricians, and health professionals assisted the Commission throughout the Inquiry. One paediatrician concluded that ‘almost all the children on Christmas Island are sick’. Further advice was provided by International Health and Medical Services, a global company contracted by the Government to provide services to the detention centres. The medical evidence, some subsequently reported in the Australian Medical Journal, provides an authoritative basis for many of the findings in this Report and amply confirms the data collected by the Commission from the children themselves.

As the impact of detention varies depending on the child’s age and stage of life, this Report contains separate chapters on babies, preschoolers, primary school aged children and teenagers. Separate chapters are also allocated to unaccompanied children, children detained indefinitely, and children detained on Nauru. Chapter 5 sets out the applicable international law and chapter 2 contains a table linking specific findings with the relevant breach of treaty obligations.

Direct quotes from children have been included in this Report. As the names of the children are confidential, citations are confined to the date, age of the child and location of the source.

While the Commission cannot exercise its powers in Nauru, a sovereign country, we retain jurisdiction to consider the legality of Commonwealth activities on the island as they affect the 186 children currently held there. We have relied on the expert evidence of service providers, medical professionals and communications from detainees to make findings about the impact of detention on the children.

This Report owes a considerable debt to the many people who assisted the Inquiry, including medical experts, lawyers, NGOs, student interns and the wider Australian community. The Commission is deeply grateful for their generous contributions over the last eight months.

The evidence collected in this Report is powerful.

The overarching finding of the Inquiry is that the prolonged, mandatory detention of asylum seeker children causes them significant mental and physical illness and developmental delays, in breach of Australia’s international obligations.

The following is a snapshot of the findings:

Changes in law and Government policy since the Inquiry was launched

Since the Inquiry was announced, changes have been made in Government policy and practice, along with decisions of the High Court, that affect asylum seeker children in detention:

The Commission is pleased to recognise these changes as being in the best interests of many asylum seeker children.

Once the Inquiry was established, the Department created a Task Force dedicated to supporting its work headed by a senior executive officer. The Commission thanks the Task Force for their cooperation in arranging detention centre visits and responding to requests for information and documents.

It is recommended that:

It is troubling that members of the Government and Parliament and Departmental officials are either uninformed, or choose to ignore, the human rights treaties to which Australia is a party. The High Court of Australia in Teoh has confirmed that, when making decisions that affect children, government officials should take account of the rights guaranteed by the Convention on the Rights of the Child.

My hope is that the evidence detailed in this Report will prompt fair-minded Australians, Members of Parliament and the Federal Government to reconsider our asylum seeker policies and to release all children and their families immediately, or as soon as practical.

It is of profound concern that the Government has recently introduced amendments to the Migration Act to redefine the definition of ‘refugee’ to meet government policy rather than international law. It is also proposed that people may be removed from Australia under the Act even if this does not comply with Australia’s international non-refoulement obligations. If passed, this will be a rare and internationally embarrassing instance in which Australia has explicitly declared that its laws remain valid, even if they violate international law.

It is imperative that Australian governments never again use the lives of children to achieve political or strategic advantage. The aims of stopping people smugglers and deaths at sea do not justify the cruel and illegal means adopted.

Australia is better than this.

As the arrival of asylum seeker children by sea without visas has ended for the moment, it is time to refocus on the plight of the 800 children who remain in Australian detention centres and on Nauru.

Australia should return to its historical generosity of spirit by welcoming to our shores those who seek our protection from conflict and persecution.