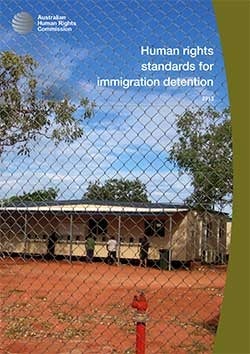 This publication, Human rights standards for immigration detention, sets out benchmarks for the humane treatment of people held in immigration detention (referred to throughout the Standards as detainees). The Commission has prepared the Standards under section 11(1)(n) of the Australian Human Rights Commission Act, which enables the Commission to publish ‘guidelines for the avoidance of acts or practices’ which may be inconsistent with or contrary to any human right.  The Commission anticipates that the Standards may be revised in coming years, to reflect any issues that emerge from their practical application.

The purpose of these Standards is to assist independent monitors, such as the Australian Human Rights Commission, to monitor and inspect Australia’s immigration detention facilities.

Under the OPCAT, State Parties must also grant ‘national preventive mechanisms’ (NPM’s), established within Australia, access to all places of detention and their installations and facilities.

The definition of a place of detention for the purposes of these Standards is the same as that contained in article 4(2) of OPCAT, which is applicable in the immigration context. This definition is ‘any form of detention or imprisonment or the placement of a person in a public or private custodial setting which that person is not permitted to leave at will by order of any judicial, administrative or other authority’. As noted by the United Nations High Commissioner for Refugees, ‘detention can take place in a range of locations, including at land and sea borders, in the ‘international zones’ at airports, on islands, on boats, as well as in closed refugee camps, in one’s own home (house arrest) and even extraterritorially’ (UNHCR Guidelines p 9 [7]).