A last resort? National Inquiry into Children in Immigration Detention 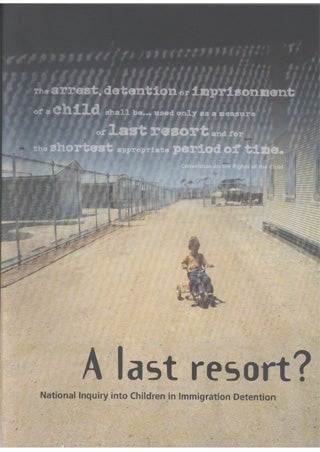 This is an important report. It deals with our treatment of children in the most recent wave of boat people seeking refuge and a better life on our shores. It does so in the knowledge that there is a tension created by the community expectation that the Government will defend Australia's security while simultaneously upholding individual rights - the notion of the 'fairgo' for all. The report also challenges the argument that family unity within immigration detention centres is the only way that children's 'best interests' can be protected.

The findings of the report are the result of carefully balancing large volumes of solid evidence collected, mainly during 2002, which was then interpreted in a cautious manner. The Inquiry paid special attention to the principles of natural justice in reaching its conclusions. The Inquiry greatly appreciates the time and effort put in by the large numbers of individuals and community organisations that made written and oral submissions to the Inquiry. The Inquiry also thanks the Department of Immigration and Australasian Correctional Management for their assistance throughout the Inquiry. However, I am especially grateful to those detainees, temporary protection visa holders and former staff members who generously shared their personal experiences with the Inquiry.

The primary focus of this report has been on the human rights that all children in Australia should enjoy.

The arrest, detention or imprisonment of a child shall be ... used only as a measure of last resort and for the shortest appropriate period of time. Few people would disagree with these words from the Convention on the Rights of the Child. In fact, most Australians would agree that all other options should be explored before a child is locked up. The words from the Convention form the basis for the title of the report of the National Inquiry into Children in Immigration Detention: A last resort?

A last resort? talks about children who arrived in Australia to seek protection from despotic regimes like those of Iraq and Afghanistan where breaches of human rights were the norm. Most of these children arrived with their

families, some were unaccompanied. More than 92 percent of all children arriving by boat since 1999 have been recognised by Australian authorities to be refugees. In the case of Iraqi children the figures are as high as 98 percent. This means they left their homelands because they had little real choice. Seeking asylum elsewhere was, for them, a last resort.

Yet, since 1992, we have welcomed these children by taking them to remote facilities, detaining them there to wait for a visa. Australia's immigration policy makes the detention of these children the first and only option and it puts no limit on the time that they are held there. Children wait in detention for months or years - one child spent almost five and a half years in detention before being released into the community as a refugee. In fact, as at the end of 2003, the majority of children in detention had been held there for more than two years. This policy seems a complete departure from the principle of detention as a measure of last resort.

Australians don't need a team of experts or dramatic media stories to convince them that detention centres are no place for children to grow up. However, this Inquiry analysed evidence from an enormous number of sources in order to objectively assess whether this gut reaction was right. The answer is conclusive even the best-run detention centre is no summer school or holiday resort. In fact, they are traumatising places which subject children to enormous mental distress. This confirms the need to ensure that children should only be locked up in this environment as a measure of last resort and for the shortest appropriate period of time.

The irony is that the long-term impact of this system on children is likely to be borne by Australian society as a whole, since almost all children in the detention centres eventually become members of the Australian community. They will carry the effects of their experience with them throughout their lives.

However, even if we were to ignore these human rights concerns, what is the rationale for, or logic of, the current immigration detention system? Does this rationale withstand vigorous examination?

Some have argued that mandatory detention is necessary to prevent floods of boat arrivals. We must take a reality check here. Even if we agree that between 1999 and 2002 the number of people arriving by boat was relatively significant, from a midrange time perspective the number of arrivals is small. Over the past 14 years approximately 13,500 people have arrived by boat - this number of people would fill approximately 15 percent of the Melbourne Cricket Ground. Compare this to the approximately 1.4 million new settlers who arrived in Australia over the same period. In other words, 'boat people' constituted roughly one per cent of our total intake over that period.

But even if these numbers were greater, the detention of one group of children to deter another group from coming to Australia raises the issue of the proportionality of our policy response. Compare this with our treatment of children who commit a crime: such young offenders are only detained after prompt and careful consideration by a magistrate, the period of imprisonment is strictly limited and is reviewable at several levels. Yet under our immigration laws, children who have not been accused of any crime are detained automatically and for indefinite periods and there is also no real opportunity to argue their case before an independent tribunal or court. A comparison of the two regimes highlights the lack of proportionality of our immigration detention policy.

The international community must take into account the 'cause and effect' nature of migratory movements when developing policies; if one part of the globe is under pressure there is likely to be a corresponding increase in asylum seekers elsewhere. The Australian experience with boat people is testimony to this reality. People smugglers who risk children's lives by taking them on a perilous voyage in an unseaworthy boat, should be appropriately dealt with through international policing co-operation. However the answer to these issues lies more in international cooperation and planning than in the creation of 'fortress Australia'.

Others have argued that in the post 9/11-Bali world the terrorist threat requires a total embargo on unauthorised arrivals. I am fully conscious of the threat posed by terrorism which, when all is said and done, represents the utter negation of human rights. But in the case of boat people, these are the children who are the victims of the Saddam Hussein's of this world, not the perpetrators. That is why most of them left their homes in the first place. In any case, Dennis Richardson, the Director-General of ASIO, stated that not one person arriving by boat between 2001 and 2002 'had received an adverse security assessment in terms of posing a direct or indirect threat to Australia's security'.

Finally, some have warned that without detention, children and families will disappear into the community and will not be available for removal if they are found not to be refugees. This argument lacks supporting evidence and disregards the fact that, according to the Department's own statistics, around 90 per cent of boat arrivals whether adult or child - are found to be genuine refugees. While there is always some flight risk, since almost all children arriving by boat are given protection visas in the end, there seems little incentive for these refugees to go underground. In any event, our domestic justice system deals with hundreds of children charged with a crime, who may also present a flight risk, but are released on bail. We accept this system as a necessary hallmark of a 'civil society', yet fail to apply these principles to children seeking asylum in Australia.

Since the announcement of the Inquiry, there have been some positive measures to improve the environment in which children in detention live. I commend the Department for introducing these changes without awaiting the formal outcome of this Inquiry. The transfer of unaccompanied children to foster homes, increased access to education outside detention and the creation of residential housing projects are steps in the right direction - although the housing project still has the inherent weakness of restricting liberty and excluding fathers. However, these measures ultimately represent a 'blu-tack' approach to repairing a detention system that is fundamentally flawed.

While recognising the right of each country to protect its borders, I hope that A last resort? removes, once and for all, any doubts about the harmful effects of long term immigration detention on children. It warns governments, in Australia and around the world, that mandatory, indefinite and unreviewable detention of children is no answer to the global issue of refugee movements.

Even if there is no child in detention when this report is tabled in Parliament, it is now time for our elected parliamentary representatives to amend our immigration legislation to ensure that it complies with Australia's accepted human rights standards.

Let no child who arrives in Australia ever suffer under this system again.