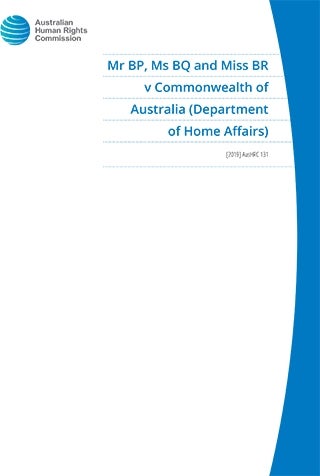 Report into complaint of breach of non-refoulement obligations, arbitrary interference with family and failure to consider the best interests of the child

I have completed my report pursuant to s 11(1)(f) of the Australian Human Rights Commission Act 1986 (Cth) into the complaint of Mr BP, Ms BQ and Miss BR alleging breach of non-refoulement obligations, arbitrary interference with the family and failure to consider the best interests of the child.

Mr BP, Ms BQ and Miss BR complain that the actions of the Department of Home Affairs (department) amounted to a breach of articles 7, 17 and 23 of the International Covenant on Civil and Political Rights (ICCPR), as well as a breach of Australia’s obligations under the Convention on the Rights of the Child (CRC).

As a result of this inquiry, I have found that new protection claims raised by Mr BP should have been referred to the Minister in accordance with the relevant guidelines. An administrative error within the department resulted in pertinent information not being put before the relevant decision maker. Consequently, I am not satisfied that the department conducted an assessment of Mr BP’s changed circumstances sufficient to properly assure itself that deportation or removal would not expose Mr BP to a ‘real risk’ of treatment prohibited by article 7 of the ICCPR upon his return to Sri Lanka. As a result, I considered that the department’s decision to finalise Mr BP’s request for ministerial intervention without referral to the Minister could be considered inconsistent with, or contrary to, his human rights.

With respect to articles 17 and 23 of the ICCRP and the CRC, I have found that the actions of the department and the Minister did not constitute a breach.

I note that Mr BP was granted a permanent Partner visa on 6 April 2019 and I commend the department on its constructive response to this issue.

I have set out the department’s full response to my notice of findings in Part 17 of this report.