Tell Me About: Bridging Visas for Asylum Seekers 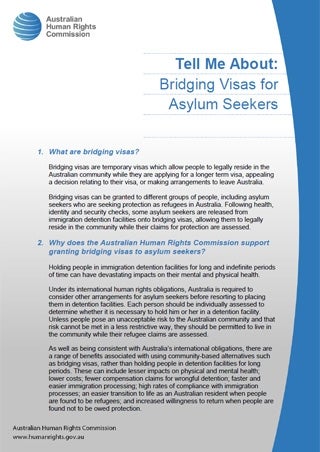 1. What are bridging visas?

Bridging visas are temporary visas which allow people to legally reside in the Australian community while they are applying for a longer term visa, appealing a decision relating to their visa, or making arrangements to leave Australia.

Bridging visas can be granted to different groups of people, including asylum seekers who are seeking protection as refugees in Australia. Following health, identity and security checks, some asylum seekers are released from immigration detention facilities onto bridging visas, allowing them to legally reside in the community while their claims for protection are assessed.

Holding people in immigration detention facilities for long and indefinite periods of time can have devastating impacts on their mental and physical health.

Under its international human rights obligations, Australia is required to consider other arrangements for asylum seekers before resorting to placing them in detention facilities. Each person should be individually assessed to determine whether it is necessary to hold him or her in a detention facility. Unless people pose an unacceptable risk to the Australian community and that risk cannot be met in a less restrictive way, they should be permitted to live in the community while their refugee claims are assessed.

As well as being consistent with Australia’s international obligations, there are a range of benefits associated with using community-based alternatives such as bridging visas, rather than holding people in detention facilities for long periods. These can include lesser impacts on physical and mental health; lower costs; fewer compensation claims for wrongful detention; faster and easier immigration processing; high rates of compliance with immigration processes; an easier transition to life as an Australian resident when people are found to be refugees; and increased willingness to return when people are found not to be owed protection.

3. What conditions apply to asylum seekers on bridging visas?

Asylum seekers who are living in the community on bridging visas have no right to family reunion, and are not able to re-enter Australia if they travel overseas.

4. What support is available for asylum seekers on bridging visas?

Asylum seekers who are granted bridging visas are not eligible for social security payments through Centrelink and are not provided with public housing.

Asylum seekers may be provided with support to help them with the initial transition from immigration detention to living in the community. This might include financial assistance to help with basic living expenses (at 89% of the Centrelink Special Benefit rate), short-term emergency accommodation, and community orientation.[1] This transitional support is only available for six weeks.

Following this, some asylum seekers experiencing financial hardship may be eligible for assistance under the Asylum Seeker Assistance Scheme (ASAS) while their immigration status is being resolved.[2] To qualify they must have been waiting for a decision about their protection visa application for at least six months or must meet certain vulnerability criteria.[3] Under the ASAS, asylum seekers may be eligible to receive financial assistance to help with basic living expenses (at 89% of the Centrelink Special Benefit rate).

Alternatively, asylum seekers who are particularly vulnerable due to exceptional circumstances, and have no access to other support or assistance in the community, may be eligible for the Community Assistance Support (CAS) program.[4] The CAS program helps asylum seekers to meet their basic health and welfare needs by providing assistance which may include complex casework support, financial assistance to help with basic living expenses (at 89% of the Centrelink Special Benefit rate), rent assistance (at 89% of the Centrelink Rent Assistance rate) and assistance with essential medical expenses.

Under the ASAS and the CAS, the Australian Red Cross may also provide eligible asylum seekers with referrals to health services, counselling, accommodation, clothing and furniture, education, legal services and social support.

All asylum seekers granted bridging visas are eligible for Medicare.

5. How do conditions attached to bridging visas affect the lives of asylum seekers?

While some asylum seekers will receive support through the ASAS or the CAS program, others will not. As a result of conditions attached to bridging visas, particularly the prohibition on working, some asylum seekers may face poverty or homelessness. Without the ability to support themselves through paid work, people may become dependent on community services for their basic needs.

Past experience in Australia has shown that restrictions which prevent asylum seekers from working and earning an income can negatively affect their physical and social wellbeing, resulting in problems with health and nutrition, isolation, depression and other mental health issues, and family breakdown.[5]

Being able to work contributes both to an individual’s dignity and to the survival of that person and his or her family.[6] Allowing asylum seekers to work would enable them to be better prepared, both financially and psychologically, for their transition to life as Australian residents if they are granted protection visas. This is significant because in recent times around 90% of asylum seekers who arrived in Australia by boat were ultimately found to be refugees and were granted protection visas.[7]

The conditions placed on the bridging visas which are granted to asylum seekers can impact significantly on their ability to enjoy basic human rights. This is particularly true for those granted bridging visas without the right to work, as is the case for asylum seekers who arrived in Australia by boat on or after 13 August 2012.

Australia has obligations as a party to the International Covenant on Economic, Social and Cultural Rights (ICESCR) to take concrete and targeted steps to promote and protect the economic, social and cultural rights of all people in Australia. These rights include:

The right to work in article 6 of ICESCR is not an absolute and unconditional right to obtain employment. [8] However, Australia has an obligation to ensure, as a minimum, ‘the right of access to employment, especially for disadvantaged and marginalized individuals and groups’.[9] Australia may be in breach of its obligations under ICESCR if it denies asylum seekers access to the labour market, especially if it does so for such periods of time that they are forced into poverty.[10]

Once an asylum seeker is found to be a refugee, Australia has an obligation under Article 17 of the Convention Relating to the Status of Refugees to afford that person the same right to work that is granted to other foreign nationals in the same circumstances.[11]

For further information, see the Commission’s submission to the Parliamentary Joint Committee on Human Rights.[12]

7. What does the Commission recommend?

The Commission has recommended that the need to detain asylum seekers should be assessed on a case-by-case basis taking into consideration individual circumstances. Unless an asylum seeker is individually assessed as posing an unacceptable risk to the Australian community and that risk cannot be managed in a less restrictive way, he or she should be granted a bridging visa or released into community detention.

The Commission has also recommended that the placement of asylum seekers in the community should include:

[5] See the report of the Network of Asylum Seeker Agencies Victoria, Seeking Safety, Not Charity: A report in support of work-rights for asylum-seekers living in the community on Bridging Visa E, (2005), pp 27-31, at http://www.ajustaustralia.com/resource.php?act=attache&id=158. 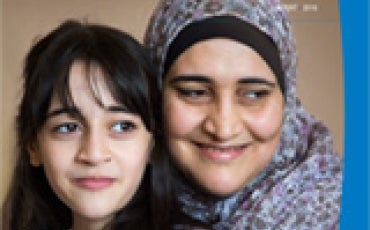 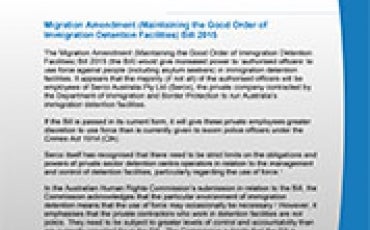 Use of force in immigration detention facilities 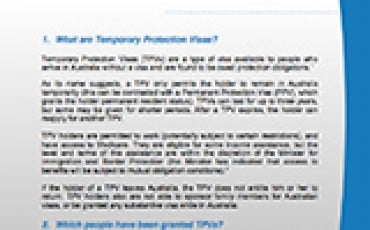