Tell Me About: Children in immigration detention in Nauru 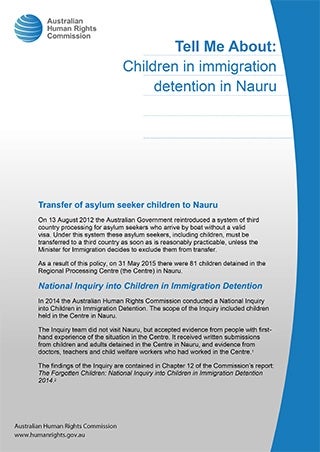 On 13 August 2012 the Australian Government reintroduced a system of third country processing for asylum seekers who arrive by boat without a valid visa. Under this system these asylum seekers, including children, must be transferred to a third country as soon as is reasonably practicable, unless the Minister for Immigration decides to exclude them from transfer.

As a result of this policy, on 31 May 2015 there were 81 children detained in the Regional Processing Centre (the Centre) in Nauru.

In 2014 the Australian Human Rights Commission conducted a National Inquiry into Children in Immigration Detention. The scope of the Inquiry included children held in the Centre in Nauru.

The findings of the Inquiry are contained in Chapter 12 of the Commission’s report: The Forgotten Children: National Inquiry into Children in Immigration Detention 2014.[2]

Conditions in the Centre in Nauru

The Inquiry received reports that children and their families are being detained in Nauru in very hot and cramped conditions in vinyl tents, with no privacy or air-conditioning.

Submissions to the Inquiry identified serious shortages of even the most basic needs on Nauru, especially water. It was reported that showers were sometimes restricted to 30 seconds each day, and that at other times water apparently ran out altogether.

There were also numerous reports of problems with cleanliness and hygiene, especially in relation to the toilets and showers. One doctor who had worked on Nauru told the Inquiry that the state of the toilets contributed to dehydration as many women and children ‘didn’t want to drink water during the day because they didn’t want to use the shared toileting facilities’.[3]

The Inquiry also received evidence of a lack of adequate clothing (including underwear) and footwear, appropriate educational facilities and access to appropriate health care services provided to children in the Centre in Nauru.
The evidence of the harsh conditions on Nauru is consistent with that of the United Nations High Commissioner for Refugees (UNHCR). UNHCR visited the Centre in Nauru in October 2013 and concluded that:

the harsh and unsuitable environment at the closed [Centre on Nauru] is particularly inappropriate for the care and support of child asylum-seekers...no child, whether an unaccompanied child or within a family group, should be transferred from Australia to Nauru. [4]

Impact of detention on children

The Commission found that the children detained indefinitely in Nauru are suffering from extreme levels of physical, emotional, psychological and developmental distress. A doctor who worked in Nauru for six weeks between February and March 2014 stated that ‘every day ... there were teenagers and unaccompanied children who were either on suicide or self-harm watch’.[5]

The Commission is concerned that detention in Nauru is mandatory for children and that there is no time limit on how long they will be detained.

The impact of being in detention was compounded by many children having been separated from family members.

There were also reports that it is common practice for people working in the Centre to refer to children by their boat number, rather than their name. The children told child welfare officers that they are ‘just a number’ and feel like ‘animals and not people’.[6]

The Inquiry received reports that there is no child protection framework for children detained in the Centre (or in Nauru generally). Children’s welfare service providers claimed that they are unable to remove children in the Centre from situations of abuse except in extreme circumstances, and then only for a limited period of time.

The assessment process prior to sending children to Nauru

Prior to transferring children to Nauru, the Department of Immigration and Border Protection conducts a ‘Pre-Transfer Assessment’. Health clinicians expressed concerns to the Inquiry about the haste and standard of the medical assessments conducted to determine whether a child was fit to be flown to and detained in the Centre.

The Commission reviewed a number of the pre-transfer assessments the Department conducted in relation to children. The Commission concluded that Departmental officers do not assess the care and welfare needs of an individual child and consider whether those needs can be met in the Centre in Nauru before recommending the child’s transfer. The Commission found that Australia transferred children to Nauru regardless of whether the transfer was in those children’s best interests, in breach of Australia’s obligations under international law.[7]

The Commission also found that some asylum seekers, including children, were sent to Nauru despite having physical and mental health problems.

Recent Government review into the Centre

In October 2014 the Minister for Immigration and Border Protection announced a review by Philip Moss into allegations relating to conditions and circumstances at the Centre in Nauru.

The Moss Review confirmed many of the Commission’s concerns about the safety of the children in the Centre in Nauru. It found that ‘there were both reported and unreported allegations of sexual and other physical assault’ in relation to children.[8] It also found that the ‘marquee accommodation’ in Nauru presents ‘significant personal safety and privacy issues’ and the ‘lack of privacy may be a factor in the sexualised behaviours of some children in the Centre through observing adult sexual activity.’[9]

The Moss Review also found that between October 2013 and October 2014, 17 children engaged in self-harm (including lip stitching by 16 and 17 year olds, and one attempted hanging).[10] The youngest child involved in self-harm was an 11 year old.

The Commission recommends that all children and their families should be transferred from the Centre in Nauru into the Australian community. It also recommends that no child or parent should be taken to Nauru unless it provides a rule of law based regime for their assessment as refugees, and unless the conditions of detention in the Centre meet international standards.

[1] All of the public submissions are available online at http://www.humanrights.gov.au/our-work/asylum-seekers-and-refugees/national-inquiry-children-immigration-detention-2014-0.

[2] The report is available in Word, PDF and HTML formats on the Commission’s website here: http://www.humanrights.gov.au/our-work/asylum-seekers-and-refugees/publications/forgotten-children-national-inquiry-children.

[8] P Moss, Review into recent allegations relating to conditions and circumstances at the Regional Processing Centre in Nauru: Final Report (February 2015), para 21. At http://www.immi.gov.au/about/dept-info/nauru.htm (viewed 6 May 2015).

[9] P Moss, Review into recent allegations relating to conditions and circumstances at the Regional Processing Centre in Nauru: Final Report (February 2015), para 3.147 and 3.149.