Those who've come across the seas: Detention of unauthorised arrivals 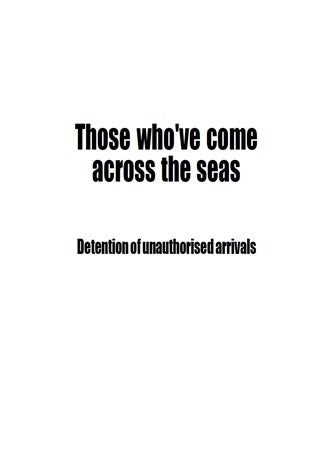 HREOC’s report, tabled in federal Parliament on 12 May 1998, deals with the policy of mandatory detention of most unauthorised arrivals and the conditions of detention for those detained. The report had its origins in the many complaints received by HREOC from, or on behalf of, people in immigration detention centres.

HREOC found that the policy of mandatory detention violates international law, which permits detention only where necessary to verify the detainee’s identity, to determine the elements on which the claim to refugee status or asylum is based, to deal with people who have destroyed their documents to mislead the authorities or to protect national security or public order. HREOC recommended that those whose detention cannot be justified for one of these reasons should be released, subject to reporting requirements, until their status is determined. It proposed a range of community release options.

The report also found that the conditions, treatment and services for detainees vary considerably among the three detention centres which were the focus of the inquiry: Port Hedland, Perth and Villawood. It made detailed recommendations to address human rights breaches that were identified and significantly enhanced external oversight and monitoring of the conditions and treatment of detainees.