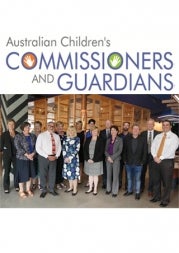 The ACCG met in Perth, Western Australia on 15 and 16 May 2018. At this meeting, the members officially welcomed the New Zealand Commissioner for Children as a full member of the group. To accommodate this change, the group will change the name of the group to ANZCCG and revise its Terms of Reference.

Members of the ACCG Officers Network joined the meeting with ACCG members on day two and met separately following the meeting to progress actions from the ACCG meeting.

Senior local Noongar woman, Colleen Hayward, officially welcomed members to country on day one and the members enjoyed a traditional dance performance by the Moorditj Mob at the beginning of day two.

Over the course of the meeting, members exchanged information on work underway in each jurisdiction, covering a broad range of issues including, child protection, youth justice, family law, child rights, online safety, child injury and transitions to employment for young people. Members acknowledged Pink Shirt Day 2018 to mark the end of Bullying-Free New Zealand Week. The theme of the day was Speak Up and Stand Together to Stop Bullying. The members also acknowledged 17 May 2018 as the International Day Against Homophobia, Biphobia and Transphobia (IDAHOBIT).

Discussions focused on issues relevant to the ACCG’s key priorities, developed at its meeting in May 2017. Members affirmed their commitment to these priorities.

Members agreed that the development of approaches that emphasise Aboriginal and Torres Strait Islander cultural authority in reducing the disproportionate disadvantage experienced by Aboriginal and Torres Strait Islander people is a priority. Members committed to advocating for urgent support and investment in legislation, policy and practice to develop effective mechanisms for improving Aboriginal leadership and control over all matters affecting Aboriginal communities and particularly in areas such as child protection.

In keeping with their commitment to hear and promote the views of children and young people, members discussed the forthcoming release of a joint paper that synthesises the findings from consultations undertaken by members’ within their jurisdictions between 2015 and early 2018. The joint participation paper will provide a snapshot of children and young people’s views across a broad range of issues and will be available in mid-2018.

Members also discussed the rights of children and young people to be heard during family law proceedings. Members have written to the Australian Law Reform Commission to urge it to ensure the voices of children and young people are included in its current Review of the Family Law System. New Zealand Commissioner for Children, Judge Andrew Becroft, informed members about practices in New Zealand that require all judgements in family law matters to set out the child’s view and the reasons why they could not be followed where that is the case.

Members will continue to consult with children and young people around issues important to their wellbeing and on decisions that affect them. Further information on any consultations can be obtained from members’ individual websites.

Promoting the rights of children and young people in youth justice detention continues to be a priority in all jurisdictions with members continuing to promote the ACCG Statement on Conditions and Treatment in Youth Justice Detention to guide improvements in the conditions and treatment of young people in youth justice detention.

ACCG members affirmed the need for comprehensive assessment and management of the health and wellbeing of young people in the youth justice system and for greater early intervention strategies to diagnose and treat children and young people with disability.

Improving the safety of children and young people in organisations

The release of the final report of the Royal Commission into Institutional Responses to Child Sexual Abuse (the Royal Commission) in December 2017 was an important topic of this meeting. Members listened to a presentation from Professor Helen Milroy on her reflections as one of the six Commissioners who undertook the five year long inquiry. The need to improve responses to children impacted by trauma and to place children at the centre of services and supports were key themes of Professor Milroy’s presentation.
Members endorsed the need to fully implement the recommendations of the Royal Commission. In particular members called for governments to ensure that the oversight of child safe standards in organisations provides a comprehensive system of oversight that is independent and child-focused to ensure a proactive and preventative approach to better protect children from harm.

Members discussed developments in each jurisdiction and noted that the abuse of children in institutional settings remains a contemporary issue. In recognition that governments are still considering the Final Report’s recommendations, members agreed to add the review of implementation progress as a standing item on future meeting agendas.

Members also noted the current work related to the implementation of the Optional Protocol to the Convention against Torture and Other Cruel, Inhuman or Degrading Treatment or Punishment (OPCAT) following Australia’s ratification of the protocol in December 2017 and the overlap with the Royal Commission’s recommendations on oversight. Members noted the New Zealand model which provides a child centred model of oversight across all places of detention.

Professor Leah Bromfield presented to members on work she has undertaken on behalf of ACCG members to review case practice frameworks that guide child protection work both in Australia and overseas. The work highlights the complexity and challenges of child protection work and the need for improvement in developing comprehensive, effective responses. The research will be published in mid-2018.

Members also heard from Dr Meredith Kiraly on her research focusing on kinship (family and kith) carers which highlighted the lack of reliable data on the numbers of children placed with kinship carers both formally and informally, the challenges many carers experienced and the disparity in resources and support provided to kinship carers.

Members reviewed work being considered on a joint project in relation to the need to recognise and support child victims of family violence and violence against children more broadly agreeing to further progress this work before the end of 2018.

The next meeting of the ANZCCG will be held in South Australia in November 2018.