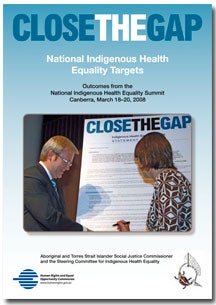 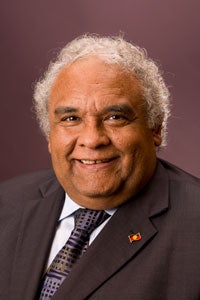 On 20 December 2007, the Council of Australian Governments (COAG) agreed to a partnership between all levels of government to work with Indigenous1 communities to achieve the target of ‘closing the gap’ on Indigenous disadvantage; and notably, to close the 17-year gap in life expectancy within a generation, and to halve the mortality rate of Indigenous children within ten-years. While Australian governments had previously committed to raise the standard of Indigenous Australians’ health to that of other Australians, this commitment was historic in that it was the first time Australian governments had agreed to be accountable for reaching this goal by placing its achievement within a time-frame.

In part, this was a response to the Campaign for Indigenous Health Equality, led by the National Aboriginal Community Controlled Health Organisation, the Australian Indigenous Doctors’ Association, the Congress of Aboriginal and Torres Strait Islander Nurses, the Indigenous Dentists’ Association of Australia, Oxfam Australia, Australians for Native Title and Reconciliation, and myself and involving a coalition of 40 or so concerned organisations. The Campaign had begun to organise in March 2006 in response to a number of recommendations for a targeted approach to achieving Indigenous health equality I had made in my Social Justice Report 2005. ‘Close the Gap’ was the catch cry and the public face of the Campaign, organised with great impact by the National Aboriginal Community Controlled Health Organisation and Oxfam Australia.

The Campaign culminated in the National Indigenous Health Equality Summit (Summit) in Canberra over 18 – 20 March, 2008. On the final day, at the Great Hall, Parliament House, the Prime Minister, Hon Kevin Rudd MP, the Minister for Health and Ageing, Nicola Roxon MP, the Opposition Leader, Brendan Nelson, as well as the leaders of the Indigenous health peak bodies2 and the mainstream health peak bodies3 signed a historic Close the Gap Statement of Intent in which they agreed to work together to achieve equality in health status and life expectancy between Indigenous and non- Indigenous Australians by the year 2030. As a part of this effort they agreed to ensuring the primary health care services and health infrastructure for Indigenous Australians were capable of bridging the gap in health standards by 2018.

Importantly, they also committed to measuring, monitoring, and reporting on their joint efforts in accordance with a range of supporting sub-targets and benchmarks. The Indigenous Health Equality Targets and the benchmarks contained here are presented to that end. These have been developed in the lead up to the Summit by the Campaign organisers drawing on a range of experts, (and particularly Indigenous experts), with experience in Indigenous health. They are intended to guide policy decisions and target-setting for Indigenous health equality over the next 25- years, until Indigenous health equality is achieved.

I believe that the COAG commitments, the signing of the Close the Gap Statement of Intent and the development of the Indigenous Health Equality Targets mark a watershed in the history of Indigenous health: the moment when we dared to take our dreams of a future in which Indigenous and non- Indigenous Australians stand as equals in terms of health and life expectation and began to turn them into reality; the moment when we said ‘enough is enough’ and began to set in place an ambitious, yet realistic, plan to bring Indigenous health inequality to an end within our lifetimes.

Aboriginal and Torres Strait Islander Social Justice Commissioner, and Chair of the Steering Committee for the Campaign for Indigenous Health Equality