This report is about two distinct subject matters. The first of these is the
welcome move by the Australian Government to transfer increasing numbers of
asylum seekers, refugees and stateless persons into community arrangements. The
second is the situation of people who remain in immigration detention facilities
with little or no prospect of being
released.[1]

Australia has a legal and policy framework which provides for mandatory and
indefinite immigration detention. Despite this framework, the Australian
Government has recently taken measures to transfer large numbers of asylum
seekers, refugees and stateless persons out of closed detention into the
community, pending the resolution of their claims for protection. This is being
achieved through the use of community detention and bridging visas.

The Australian Human Rights Commission recently visited a number of people
living in the community under these arrangements. The Commission found that, as
well as being better aligned with Australia’s international human rights
obligations, community arrangements offer a far more humane and effective
approach to the treatment of asylum seekers, refugees and stateless persons than
closed detention.

The Commission also visited four immigration detention facilities this year
to speak with asylum seekers, refugees and stateless persons. Some of these
people had received adverse security assessments and some of them were people of
interest to the Australian Federal Police or had been charged in relation to
detention centre disturbances during early 2011. Under current arrangements,
many of these people appear likely to remain in closed detention for the
foreseeable future. The Commission witnessed alarming levels of despair amongst
people experiencing prolonged and indefinite detention with little prospect of a
community placement.

Australia’s system of mandatory, indefinite immigration detention leads
to breaches of our international human rights obligations and it has a
devastating human impact. Community placement options should urgently be pursued
for all asylum seekers, refugees and stateless people who do not pose an
unacceptable risk to the Australian community. 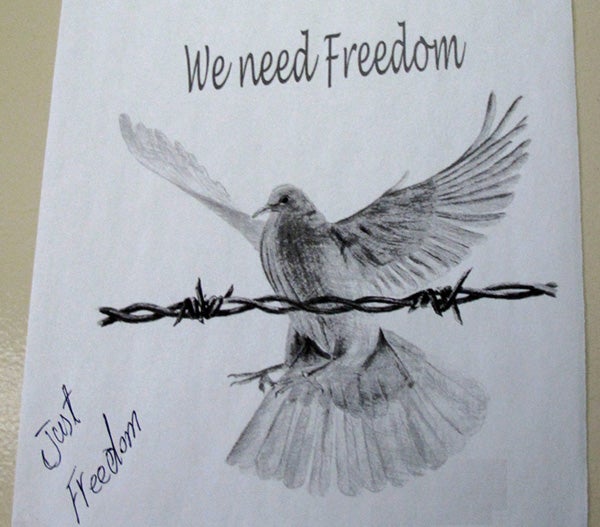 Artwork on the bedroom door of a man in detention, Maribyrnong Immigration Detention Centre.

[1] The term ‘refugee’
is used throughout this report to refer to refugees whose status has been
recognised in Australia. None of the refugees with whom the Commission spoke in
the context of producing this report had been granted a Protection Visa. The
term ‘stateless’ is used throughout this report to refer to people
who appear to be or identify as being either de jure or de facto stateless. Recognised refugees who may also be stateless are referred to as
refugees. The Commission recognises that refugee status and statelessness are
declaratory, not constitutive, in nature. As such, asylum seekers may also be
refugees and may also be
stateless.