The Community Policing Partnership Program supported the development of local partnerships between police and Muslim communities across Australia.

Joint community and police projects, which aimed to build trust, respect, inclusion and participation, were eligible to receive funding of up to $10,000.

Some concerns raised were a fear of victimisation if incidents of discrimination were reported and a general lack of trust in law enforcement agencies.

The Community Policing Partnership Program aimed to respond to these issues by:

The first round of funding closed in March 2008; 19 projects were approved in this round. Please click here to view or:

The second round of funding closed in March 2009; Congratulations to the 19 projects which were approved in this round also. Please click here to view or:

Second round projects will continue to be delivered until early 2011.

The Centre of Excellence in Policing and Security was commissioned to write a report about the program. This report was released on 25 March 2011. 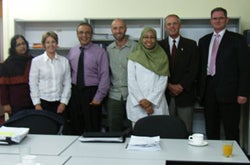