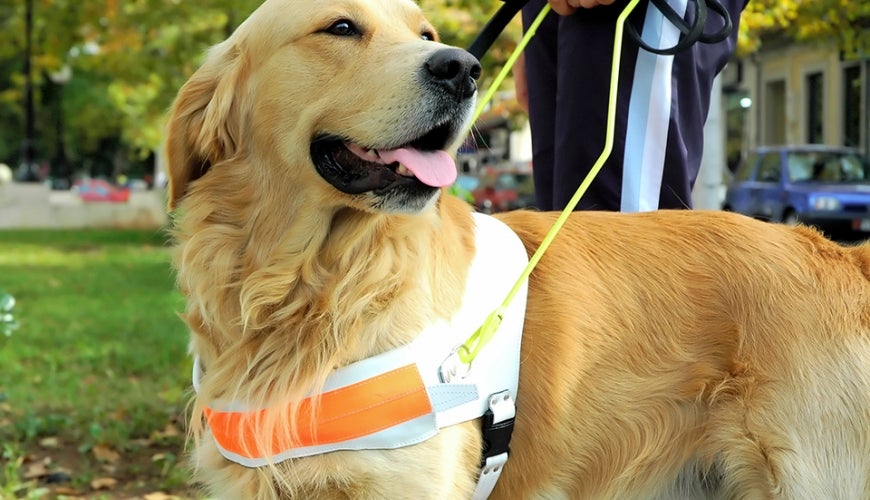 It’s widely recognised that some people with disability require support services and assistive technology to facilitate their active participation in public life and for personal activities.  The types of support that can be provided can come from a range of sources, including by trained and skilled assistance animals.

The issues relating to the use and regulation of assistance animals by people with disability are complex and continue to present issues for regulators, including with regard to training, certification and accreditation of assistance animals and handlers.  The information contained on this page is not exhaustive but presents some information about the law and various regulatory schemes across the country.

Use the links below to skip to particular sections on this page:

What is the legal understanding of an assistance animal

- Number of complaints received at the Australian Human Rights Commission

What is the legal understanding of an assistance animal

The Disability Discrimination Act 1992 (Cth) (DDA) in Section 9, sets out the legal definition of an assistance animal as a dog or other animal that:

(a) is accredited under a State or Territory law to assist a person with a disability to alleviate the effects of disability; or

(b) is accredited by an animal training organisation prescribed in the regulations; or

(c) is trained to assist a person with a disability to alleviate the effect of the disability and meets standards of hygiene and behaviour that are appropriate for an animal in a public place.

A recent Federal Court decision provides a good understanding about the law with respect to assistance animals and travel on aircraft.  The judgment can be found here.  A discussion of the key points of the case is below.

Mr Mulligan complained that Virgin Airlines Australia Pty Ltd (Virgin) discriminated against him on the grounds of disability, by refusing to allow him to travel on flights while accompanied by his assistance dog.

Mr Mulligan’s dog had been trained to assist him with relation to his cerebral palsy and vision and hearing impairments.  It had been trained by a dog training school, but not one that was ‘accredited’ for the purposes of the DDA.

The Court allowed the appeal, and ordered that Virgin pay Mr Mulligan compensation in the amount of $10,000.  The Court also declared that the conduct of Virgin amounted to unlawful discrimination under the DDA.

The key findings of the Court in the appeal include:

3. The Civil Aviation Regulations did not override the DDA, and prohibit Virgin from carrying Mr Mulligan’s dog.  Virgin had argued that it was only allowed to carry animals in the cabins of its aeroplanes if the animals met requirements which were contained in a ‘Permission’ issued by the Civil Aviation Safety Authority (CASA).  Acting under the Civil Aviation Regulations 1988 (Cth), CASA had issued Virgin with a ‘Permission’ allowing it to carry assistance animals that met a strict set of criteria, including a requirement that the animal be trained by certain accredited organisations.  Mr Mulligan’s dog had not been trained by an accredited organisation.

Virgin argued that this CASA Permission took precedence over the DDA.  That is, Virgin argued that because Mr Mulligan’s dog did not meet the standards set out in the CASA Permission, the DDA did not apply.  The Court held that this was not the case.  It held that an exception in the Civil Aviation Regulations applied to allow Virgin to carry Mr Mulligan’s dog.  Those Regulations do not prohibit an airline from carrying a dog that is trained to assist a person with a hearing or vision impairment.  Mr Mulligan’s dog met this definition.

5. Further, the Court held that the CASA ‘Permission’ was not a ‘legislative instrument’.  That was another reason that it could not be a ‘prescribed law’.

6. The Court in this case did not consider the question of what kind of evidence a person who claims they have an assistance animal can be asked to provide to show that their animal is:

(a)  an assistance animal; and

(b) trained to meet appropriate levels of hygiene and behaviour. 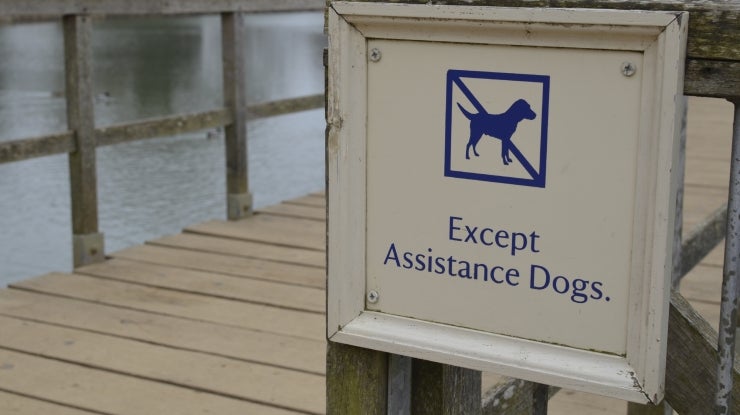 The Australian Human Rights Commission recognises the work of the Victorian Disability Discrimination Legal Service (DDLS) in formally expressing to the Commission, its views on the current confusion around assistance animal legislation and policy in Australia.

The example provided in the DDLS submission describes the barriers that a woman from Western Australia encountered when accessing a public train while visiting Victoria. The DDLS states that she was asked to leave the train by Victorian police and issued an infringement notice despite having an assistance animal approved in Western Australia and it wearing appropriate certification. Such situations highlights potential barriers to travelling interstate for people using assistance animals.

Variation among states and territories regarding accreditation and regulation of assistance animals will continue to present a range of issues for people with disability who use assistance animals to access the community. Examples of the situation in each jurisdiction is set out below.

In addition to the regulatory variation among states and territories, the existing law can create confusion as it provides permission for animals who have been certified or accredited to travel, in addition to those who have had appropriate training, but don’t have accreditation or certification. The determination of appropriate standards of ‘hygiene and behaviour’ is also an issue of confusion, as it is not specifically set out in the DDA.

The DDLS has called for a number of changes, recommending the following:

Ultimately with the implementation of the National Disability Insurance Scheme (NDIS) more people with disability can be expected to be exercising their right to access their communities and utilize appropriate supports, including assistance animals.  The Assistive Technology Strategy of the NDIS includes a regulatory role for the Agency around spending provisions with regard to Guide Dogs.  Without associated changes to address the current gaps in policy and regulation across the country with regard to assistance animals, continued barriers and discrimination will remain for people with disability who rely on these supports on a daily basis.

The Australian Human Rights Commission receives complaints regarding discrimination against people with disabilities who use assistance animals.  Data relating to complaints received over the past three years (1 July 2012 to 30 June 2015) is provided in the tables below.  Prior to these statistics are case examples of issues related to discrimination against people with disability using assistance animals.

3. The complainant has a disability that affects her mobility and balance. She was a regular spectator at a local sports club and claimed the club's manager had denied her access to the club because she was accompanied by an assistance animal she had trained to alleviate the effects of her disability. The club noted that the complainant's assistance animal did not meet that state's legislative requirements for accreditation and explained it was unaware an 'assistance animal' under federal law could include an animal trained by its owner. The complaint was resolved. The club undertook to review its policies regarding assistance animals to ensure compliance with federal disability discrimination law. The club's manager also expressed regret for any misunderstanding.

4. The complainant has a vision impairment and uses a guide dog to assist her mobility. She claimed that the respondent dental practice did not allow her to take her guide dog into the treatment room on a number of occasions even though she presented documentation certifying her dog as an assistance animal. The complainant also claimed that on one occasion, a dentist at the practice attempted to fit her dentures in the waiting room as her dog was not allowed to enter the treatment room.

5. The complainant has an acquired brain injury and has two assistance animals trained to help manage the effects of his disability. He claimed the respondent private health service did not grant him access to its premises to undergo an x-ray because he was accompanied by his two assistance dogs. On being advised of the complaint the health service indicated a willingness to try to resolve the matter by conciliation. The complaint was resolved with an agreement that the service write to the complainant expressing regret for his negative experience and confirming that in the future he would be granted access to outpatient services with his animals.

6. The complainant has an accredited assistance animal trained to alleviate the effects of a psychosocial disability. She claimed that when she went to the emergency department of the respondent public hospital for medical attention she was told she would need to leave her dog outside. She said eventually a nurse examined her in the ambulance bay and her assistance animal was allowed to remain with her. However, the complainant claimed this meant her privacy was not respected, as passers-by could see into the room through a glass door.

On being advised of the complaint the hospital indicated a willingness to try to resolve the matter through conciliation. The complaint was resolved with an agreement that the hospital pay the complainant $250 ex-gratia and write to her expressing regret for any hurt or distress she experienced as a result of her visit to the hospital. The hospital also undertook to review and update its assistance animal policy and provide relevant training to emergency staff.

Number of complaints received at the Australian Human Rights Commission

While the number of complaints received in the first two years of this period were relatively consistent, there has been a 40% increase in such complaints in the last reporting year (in contrast with the average for the two previous years).

The main disabilities of complainants were ‘blind/vision impairment’ and ‘psycho-social disability’.

*As understood from information and data provided by the complainant. It is noted that one complainant may have more than one disability.

Guide dog or other assistance animal*

Complaints in relation to other assistance dogs were most common across the three year period with a noted increase in these complaints in 2014-15.

*As understood from information and data provided by the complainant.

The main respondent organisation category across the three year period was ‘private enterprise’.

*Named individual respondents have not been included in the count of respondent organisation categories.

*Once complaint may relate to more than one area of public life.

In the three year period, the main issues raised in complaints regarding guide dogs were:

Main issues raised in relation to other assistance animals

In the three year period, the main issues raised in complaints regarding other assistance animals were:

It is noted that there has been a significant increase in complaints about cafés/restaurants/shopping centres etc. during 2014-15.

Main issues across both guide dogs and other assistance animals

In the three year period, the main issues raised in complaints regarding both guide dogs and other assistance animals were:

Across all three years the main outcome was ‘conciliated’.

*Not all complaints received in 2014-15 have been finalised.

2003 Inquiry into assistance animals other than guide dogs:

The Australian Human Rights Commission is actively working with government, private sector service providers, disability organisations, assistance animal organisations and other stakeholders to address the current regulatory issues with regard to assistance animals.  We will continue to update this page as developments progress.