All people have the same human rights regardless of their sexual orientation, gender identity or because they are intersex.

However, homophobia and transphobia can be hard to escape and LGBTI people are often left feeling like there is nothing they can do and nowhere to turn for support or information.

Young people are particularly vulnerable and are more likely to hide their sexuality or gender identity, largely out of fear of violence and abuse. In a 2010 study, 61% of same-sex attracted young people reported suffering verbal homophobic abuse, almost one in five reported physical abuse and one in four reported 'other' forms of homophobia.

In Australia, 80% of homophobic bullying occurs at school, resulting in many young people finding it difficult to concentrate at school, missing classes, and in some cases dropping out of school altogether.

Often as a result of these experiences, LGBTI people are three times more likely to experience depression and anxiety than the broader community. 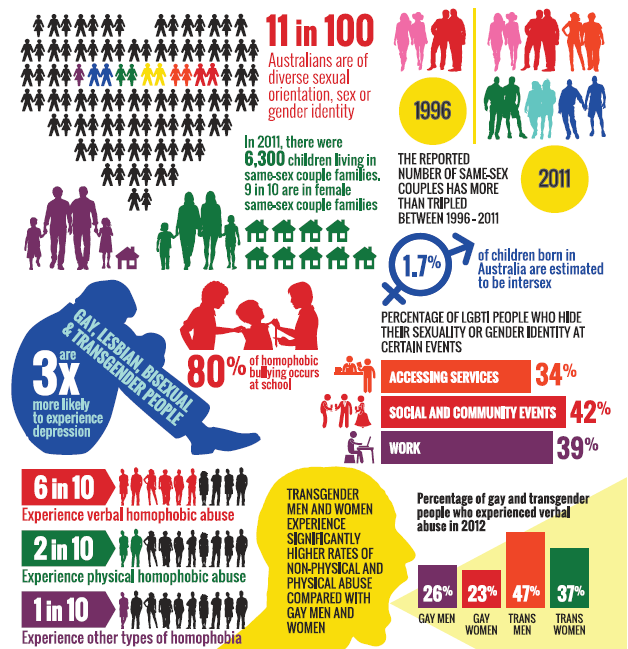 But it doesn’t have to be this way. Support from family, friends, and professionals, like doctors and teachers, has been shown to reduce the impact of homophobia on LGBTI youth.

So if you are someone who is experiencing LGBTI bullying and harassment, or if you witness this happening to someone, speak out. There is always someone out there who will listen.

No one should be victimised because of their sexual orientation, sex or gender identity. Homophobia can be stopped.

It starts with you.