Many people will have a disability at some stage in their lives. For some, the disability will be temporary. Others may be affected for a lifetime. 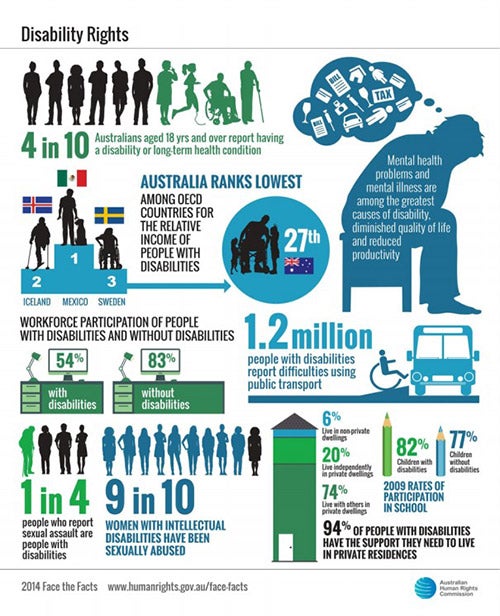 Whatever the type or impact of a disability, everyone has the right to be an active member of their community and to have a say in the decisions that affect their lives.

The United Nations Convention on the Rights of Persons with Disabilities, which Australia ratified in 2008, sets out the role of governments to make this a reality.

However, negative attitudes, physical barriers and difficulties accessing necessary supports still limit the opportunities of people with disabilities to find work, study, socialise and be included in community life.

In Australia, the Disability Discrimination Act protects people across Australia from unfair treatment in many areas of public life. It also promotes equal rights, equal opportunity and equal access for people with disabilities.

About people with disabilities

Key issues for people with disabilities

The life expectancy of Australians born with Down Syndrome has more than tripled in the four decades to 2002, increasing from 18 years to 60 years. A contributing factor to this positive outcome is the shift in public attitudes towards Down Syndrome.[15]

The Commission helps people resolve complaints of unfair treatment under the Disability Discrimination Act. We also assess applications for temporary exemptions under the Act and provide advice on laws, policies and programs that affect people with disabilities.

The Disability Discrimination Commissioner works in partnership with others to help all Australians understand their rights and meet their legal responsibilities by conducting public inquiries and negotiating disability standards and guidelines.