Other areas of workplace discrimination 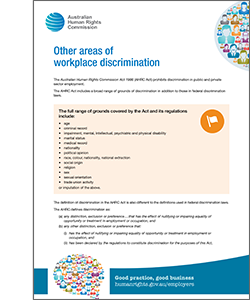 The full range of grounds covered by the Act and its regulations include:

or imputation of the above.

The AHRC Act defines discrimination as:

but does not include any distinction, exclusion or preference:

If the complaint has not been resolved and the President is satisfied that discrimination has occurred, then the President will prepare a report for the Federal Attorney-General.

The President can make recommendations in this report to compensate the person who has made the complaint for any loss or injury they have experienced. The report may be tabled in Federal Parliament.

Discrimination in occupation or employment

A key issue for employers is assessing whether a person can perform the inherent requirements of the job.

As an employer, it is your responsibility to clearly outline the essential duties of all positions in your organisation.

Employers should choose the best person for the job. They should not make assumptions about what people can and can’t do, or whether they will ‘fit in’ to the workplace, because of their background.

For example, an employer can only refuse to employ a person on the basis of their criminal record if it is clear that the person’s criminal record means they will be unable to perform the essential requirements of the job.

Aside from recruitment, key points where discrimination can occur include:

It is also the responsibility of the employer to ensure that employees are not harassed or bullied in the workplace because of their background or characteristics protected under the AHRC Act. A hostile working environment can contribute to people feeling as though they have no option but to leave their employment. 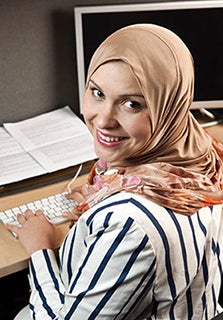 Example of discrimination on the basis of religion

Zara was recruited as an accountant with a small manufacturing company, via a recruitment agency. She told the recruitment agency that she was a Muslim and would need to arrange a room at the workplace where she could pray. This would involve three 10 minute prayer breaks during the day and during her lunch break. Zara said the recruitment agency subsequently advised her that the company had withdrawn the offer of employment because of her need to pray.

Example of discrimination on the basis of criminal record

Tony applied for a caretaker’s position with a horticultural society. He was offered the job, subject to a police check, and was told that he could move into the caretaker’s residence. Tony advised the society that he had prior convictions for drugs and driving offences and was told ‘everything should be fine’. He took the job and moved into the residence. Five weeks later his employment was terminated after the society received details of his criminal record. There had been no complaints about his work performance to that point.

Example of discrimination on the basis of trade union activity

Anna, a union delegate, was employed as an administrative assistant in a public hospital. She said that when she approached her manager to pass on a message from the union regarding the change of a meeting time, her manager shouted abuse at her, shook her finger at her and told her ‘you people do not want to get the dispute resolved’.