HRTC Highlights is a new initiative that will provide you with updates from our international human rights activities.

This edition highlights a small selection of our recent work in China and Vietnam.

The China-Australia HRTC Program began in 1998, the year after the first Human Rights Dialogue between China and Australia. During the course of the dialogue it was agreed that the two countries would undertake a program of technical cooperation aimed at strengthening the administration, promotion and protection of human rights. The Vietnam-Australia HRTC Program, which operates in the same manner, commenced in 2006. It will conclude at the end of the 2015-16 financial year.

Through these programs, we work with government and non-government partners on a wide range of human rights issues. Our activities support initiatives that partner agencies have identified as high priorities in their work program. These include some important legislative and policy reforms as well as community education and service delivery at the local level. To date, more than 245 activities have been implemented in China and more than 100 activities have been implemented in Vietnam. 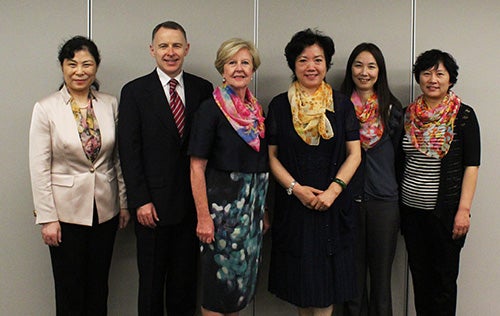 Australian Human Rights Commission President, Gillian Triggs and David Robinson, Director of the Commission’s International Programs Unit, with delegates from the All China Women’s Federation, a partner agency in the China-Australia HRTC Program. 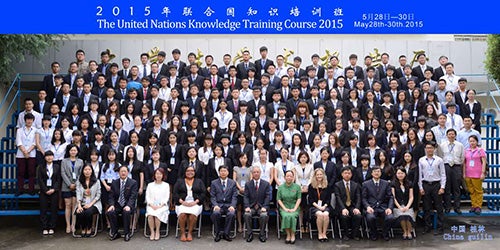 Human rights training for university students held under the China-Australia HRTC Program in Guilin, China, May 2015

In late December 2015, China passed its first national law against domestic violence. Whilst many provinces have local laws, the level of response and priority accorded to domestic violence varies dramatically between localities. The new legislation should enable a more consistent approach. In recent years, domestic violence has received increased attention at the central level and is now quite widely recognised as a crime and a human rights violation.

In Vietnam, as in Australia, domestic violence is a high priority. In October 2015, the Commission collaborated with the Vietnam Women’s Union (VWU) to deliver three consecutive HRTC workshops in Hanoi, Thua Thien Hue and Ho Chi Minh City on domestic violence prevention.

More than 170 participants from 62 provinces of Vietnam came to participate in these workshops. These were women from the national, provincial and district branches of VWU who worked with women and children affected by domestic violence in their local communities.

Ms McCormack said “it was an absolute privilege to be able to contribute to the efforts of such passionate and committed women who waste no opportunity to progress outcomes for women and children”.

She observed that the “importance of family in the Vietnamese culture and the lack of social services, particularly social housing [meant that] women in Vietnam have very few options for leaving a violent relationship”.

The 3-day workshops will go towards assisting the VWU to implement Vietnam’s Law on the Prevention of Domestic Violence 2007 and other related activities. 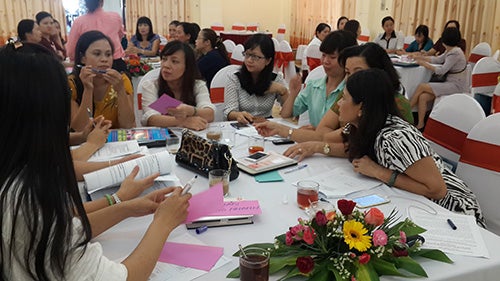 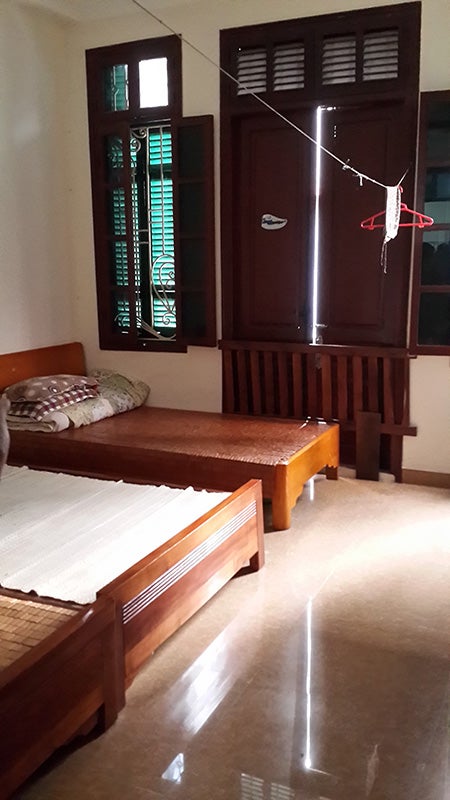 Vietnam Peace House Shelter in Hanoi for women and children who have experienced domestic violence.

The HRTC Program is delivering an extensive range of activities on prisoner rights and prisoner reintegration in Vietnam, in collaboration with the Vietnam Ministry of Public Security (MPS) and the Vietnam Lawyer’s Association (VLA).

The overall objective of the activities is to increase awareness of prisoner rights and enhance the capacity of prison officials to implement those rights. The activities also support reforms following Vietnam’s ratification of the Convention Against Torture and Other Cruel, Inhuman or Degrading Treatment or Punishment (CAT).

In 2014, 12 MPS delegates participated in a study visit in NSW and Victoria. A range of issues were explored in this visit, including strip-searching of prisoners, procedures for transporting prisoners, suicide and self-harm in custody, lack of access to medical treatment, and denial of food and water. During their time in Australia, the MPS delegates visited correctional centres and had the opportunity to meet with prisoners and hear about their experiences.

VLA similarly conducted training workshops, in Hanoi, Hoi An, and Can Tho from 12-22 September. These workshops focused on prisoner reintegration and included discussions about training and employment, housing, the elimination of criminal records, drug and alcohol programs, and combatting stigma and discrimination. Australian presenters included Leanne Barnes, Director, Strategic Policy and Planning, Corrections Victoria and Melanie Field-Pimm, Manager Communications & Development, Victorian Association for the Care & Resettlement of Offenders (VACRO).

In addition, to these activities, VLA is undertaking consultations with prisons to better understand the needs of prisoners nearing release. VLA and MPS have also collaborated to reprint a handbook on prisoner rights, which was first published under the HRTC Program in 2013. 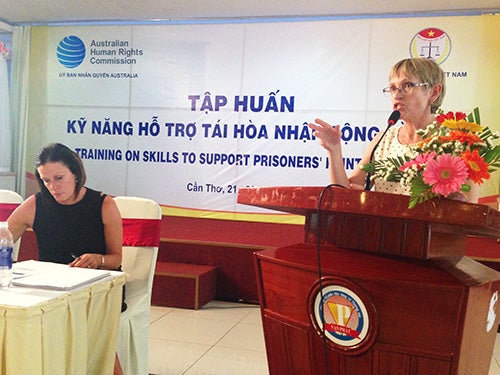 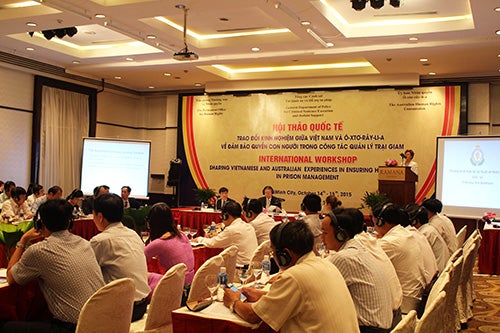 Workshop on prisoner rights with the Chinese Ministry of Public Security

Reforms to China’s rules of evidence, in particular rules that exclude illegally obtained evidence, were the focus of a series of activities undertaken with China’s Supreme People’s Court (SPC) from March to June 2015. These activities included a study visit to Australia, a consultation with Chinese criminal justice experts, and a training workshop for judicial officers from all levels of the China court system.

The three activities aimed to enhance the capacity of the SPC to implement a new chapter on rules of evidence in China’s Criminal Procedure Law. The rules deal with a range of issues including the prohibition of torture and wrongful convictions.

The five day study visit, held in March, was attended by ten SPC delegates who met with a range of Sydney based criminal justice officials and practitioners to discuss the application of evidence laws in Australia.

Over the two day expert conference, held in May in Changzhou, Jiangsu Province, over 60 participants discussed the practical implementation of the rules of evidence and deliberated key aspects of developing a judicial interpretation document.

Associate Professor David Hamer said, “The Chinese officials that are driving the reform will have gained encouragement, support, succour and a sense of solidarity from international dimension of the workshops – the recognition that the problems they face are shared across national borders, and they don’t face them alone.” 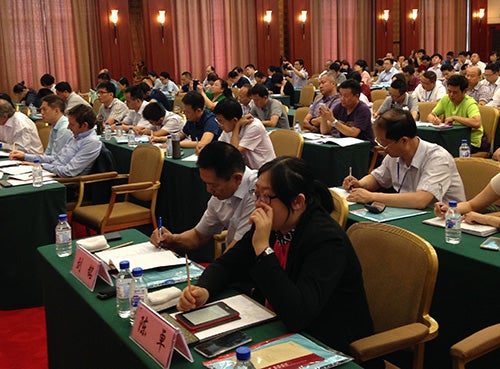 Building the capacity of NGOs

It has been estimated that there are around 460,000 non-government organisations registered in China.[1] Many of these organisations play an important role in protecting the rights and interests of vulnerable groups in China include ethnic minorities, people with disabilities, children, women, and older persons.

In July 2015, the HRTC Program worked with the Chinese Ministry of Foreign Affairs (MFA) to deliver a two-day workshop in Chongqing, China on building the capacity of NGOs to effectively participate in United Nations processes a well as MFA’s capacity to implement Universal Periodic Review recommendations.

The workshop was attended by 27 Chinese delegates including representatives from well-respected NGOs such as Beijing Legal Aid and Research Centre and the China Disabled Persons’ Federation, as well as academics and senior government officials.

Key outcomes from the workshop included an increased awareness and understanding of NGO shadow reporting, the role of UN Committees, and how NGOs can collaborate with each other and with government to advance human rights. 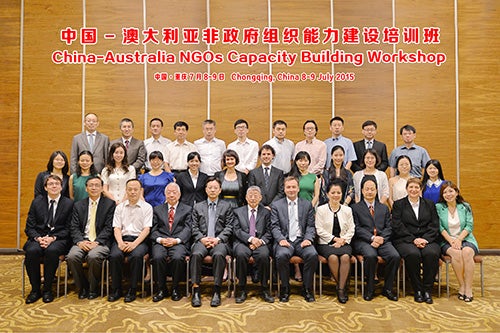 Study visit on the rights of older persons

As well as being the most populous nation in the world, China also has the world’s fastest ageing population.[2] With the number of people aged 60 years and over projected to reach 400 million or 30 per cent of China’s total population by 2050,[3] the topic of population ageing and older persons’ rights is becoming increasingly important in China.

In April 2015, an eight-person delegation led by the Ministry of Civil Affairs in China (MCA) travelled to Sydney for a week-long study visit on the rights of older persons.

In an HRTC Program first, the Commission cooperated with the MCA Division of Welfare for Elderly Persons, Department of Social Welfare and Charity Promotion to exchange experience and best practice for protecting and promoting the rights of older persons in Australia and China.

A number of topics were discussed in this introductory visit, including: age discrimination, stereotyping, protecting rights in aged care, economic security and employment, social participation, older people and technology, women and ageing, disability and ageing and social welfare.

Delegates were pleased to get a holistic overview of the Australian system and noted the connections and cooperation between different agencies and services. One member of the delegation commented that there would be value in “encouraging not just governments, but also NGOs, families, communities and older persons themselves [in China]” to do more to advance the concerns and interests of older people.

The ideas and information exchanged on this study visit will go to informing the implementation of the Law of the People's Republic of China on Protection of the Rights and Interests of the Elderly 2013 in China.[4]

For more information, take a look at ASCCA’s article about the study visit: http://www.ascca.org.au/index.php/57-events/others/254-2015-chinese-delegation-visit

MCA delegation with residents and staff of Abrina Nursing Home

Note: The views expressed in the publication don’t necessarily reflect those of the Australian Government.

[3] China’s Submission to the Secretary-General report, GA res 65/182, Office of the High Commission of Human Rights (2011). At http://www.ohchr.org/EN/Issues/OlderPersons/Pages/Submissions.aspx.