The
following resources are available: 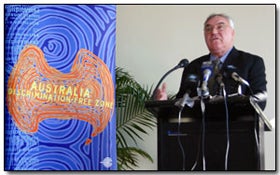 The
Human Rights and Equal Opportunity Commission summary report on national
consultations with Arab and Muslim Australians was launched in Sydney
today.

Launching
the summary report, acting Race Discrimination Commissioner Dr William
Jonas said he hoped it would point the way forward to a better mutual
understanding between Arab and Muslim Australians and the rest of the
Australian community.

"This summary report reflects the views and experiences
of 1,400 Arab and Muslim Australians who took part in the Ismaع consultations.
Many of them told us that they had felt hostility from some sections of
the Australian community over the past few years.

"However,
it doesn't seek to lay blame or rake over the events of the past. Rather
it demonstrates how important it is that we begin discussions with key
organisations to develop a more harmonious community," said Dr Jonas. 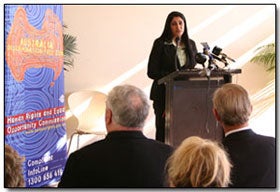 The
Commission held 69 consultations in all States and Territories with a
view to better understand the nature and causes of and solutions to anti-Arab
and anti-Muslim prejudice. The project was guided by a reference group
consisting of representatives of Arab and Muslim communities, the police,
the media and other organisations.

Dr Jonas said education and strong leadership were the keys
to long-term change in the way Arabs and Muslims are viewed in Australia.
He commended organisations that were already working on improving that
relationship.

"There
are more than 100 projects being carried out by Arab and Muslim organisations,
other community groups and Government agencies that are already working
to build stronger community relationships. They've recognised that a problem
exists and are doing something positive to address racial and religious
prejudice," he said.

Dr
Jonas said the recommendations from the Ismaع
project would benefit Arab and Muslim Australians, as well as people of
other religions.

The Ismaع project included national consultations with Arab
and Muslim Australians; an empirical and qualitative research project
undertaken by the University of Western Sydney; and an audit of strategies
and initiatives that have been undertaken by organisations to counter
anti-Arab and anti-Muslim prejudice.

An audio CD, produced in English and Arabic, which describes
the Ismaع project and includes comments from the community consultations,
will be distributed to Arab and Muslim groups, local councils and other
organisations.