This research was commissioned by the Age Discrimination Commissioner and was conducted by Urbis, using three integrated methodologies:

These are the Key Findings from the research.

1. The context of ageing and age discrimination

“I’m afraid of getting older, afraid of some of the things that I can’t control and worried about the future.” (55-64 years)

“I walk along the street and see my reflection in the shop window and think – who is that old codger?” (65+ years)

Finding: Most Australians feel that age discrimination in Australia is common.

“It was discrimination. I had turned 65, I had an injury and they said they didn’t have suitable duties for me anymore and gave my job to a young girl who was only 33. They knew there was a loophole because I had turned 65 and I could get the pension but they didn’t realise that my husband works so I get nothing.” (65+ years)

“It doesn’t matter what you have learned, you are no longer employable unless you own the agency.” (55-64 years)

Finding: More than a third of Australians aged 55+ years have experienced age-related discrimination.

“I walk into a nice dress store, I don’t get served – they see me and they think that I can’t possibly be interested in something fashionable and that I am probably killing time waiting for my grandkids.” (55-64 years)

“I had a friend who was looking to buy a new car...with cash. She walked into the dealer and was basically told that she ‘probably wouldn’t be interested in these types of cars’ and that she should look at some of the other businesses down the road.” (65+ years)

Finding: Age discrimination and invisibility result in a strong and negative emotional response.

The size of each word is directly proportionate to the number of mentions of that theme. 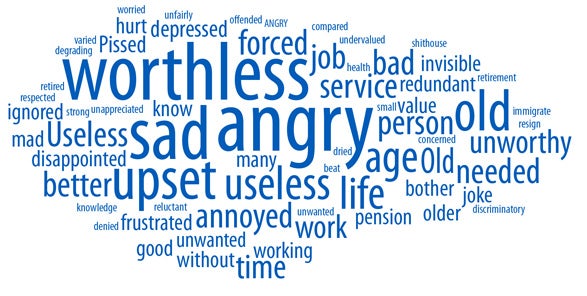 Question: How did this (discrimination) make you feel?

Base: All respondents who experienced discrimination (n=199).

“Made me feel angry and sad – my response to that person was one day you will get older too and somebody will say that to you.”

“Invisible, angry, my contribution to society, education etc. was not recognised or appreciated.”

“I call it being invisible...nobody sees you and your opinion does not matter. I feel very vulnerable.”

“Made me feel not a member of society, in fact very inadequate and I felt very distressed about it.”

“Of course it has an impact on you – I wanted to continue working – I was told ‘we don’t have suitable roles and duties for you anymore’ and that took me 12 months to get over. I had to have counselling because I thought that I still had a lot to offer and I still want to work therefore it affected my self-esteem.” (65+ years)

Finding: Those aged 18-34 years are the least concerned about age discrimination.

“If you look at discrimination based on sex or sexual preference or religion it’s [age discrimination] sort of more socially acceptable to joke about and for banter.” (26-34 years)

“It just doesn’t seem to have that sting to it. If you look at other things like religion and sexual preference and sex and so forth, it’s so careful and there are such stringent HR policies and other things – whereas people seem to be able to have a laugh about the old bastard or something like that.” (26-34 years)

Finding: Many Australians agree with a number of stereotypes about older Australians.

Finding: Those aged 18-24 years are the most negative about older people.

Finding: One in ten business respondents have an age above which they will not recruit – the average age is 50 years.

“Many people don’t disclose their age in the workplace, because they know that others may make presumptions about what that person might be thinking or doing...there are others who modify their age.” (65+ years)

3. The role and influence of the media

Finding: Older Australians are underrepresented and often poorly portrayed in the media.

“If you look at the percentage of people, the age bracket in a particular show, I think Australian-made television has a very low average age of perform[ers] compared to something coming out of Europe.” (65+ years)

“Even like presenters and stuff on TV have an expiry date where they are no longer useful.” (18-25 years)

Figure 2: Perceptions of how older people are portrayed in the media

The size of each word is directly proportionate to the number of mentions of that theme.

Question: Thinking about everything you see and hear in the media (including on TV, online, on the radio and in newspapers and magazines), how does the media portray older people?

“Since most of us have no other independent way of learning how the world goes, one way or another pretty much everything we get comes through the media. It may not come to us first hand through the media, it may filter through the opinions of other people who have seen that or other things but you can’t get away from the fact that most of the opinions you have on almost anything have come through the media in some form and it may be quite convoluted...but it is there.” (65+ years)

“We subconsciously absorb it as well and then when you see an older person all these things come up. You don’t know where they come from but they’ve come from everything that you have seen.” (18-25 years)

“It’s huge...because the majority of the population are either insufficiently educated and I don’t mean school...[they don’t] really look into things and they are receptive to slogans or headlines.” (65+ years)

“The influence is subliminal, for those who are not constructive enough in their lives to form their own views.” (65+ years)

Finding: 47% of Australians feel that the portrayal of older people in advertising is ‘unfair’.

Australians feel that the portrayal of older people needs to:

“The same as any other social group – many great things to offer, and some not so great! Realistically so to speak”.

“Just as they are – a diverse group with interests other than superannuation, insurance and funeral plans”.

“As diverse. You do have frail, doddery old people – there’s no escaping that fact. There are also some that are active and alert until they die suddenly at the age of 103”.

“To be portrayed for who they are, not how old they are. They cannot be painted with the same brush so to speak”.

“Like everyone else. Age doesn’t need to be factored into it”.

“Intelligent people who can still contribute – either in business or with the family. More recognition of the skills they can contribute”.

“More focus on the different roles that older people are engaged in. How many older people, though retirees, are called on to support their families”.

“As people that know a lot about a lot of things and could teach young people and help them by passing on what they know”.

“As being capable of contributing, being active, interested and willing to participate”.

“As people who contribute to society, from still being in the workforce, to charity or community work, not just lazy, retired people”.

“While some older people are fearful, a lot are not. I believe that older Australians are often influenced by the media, which means that they are often ‘made’ to be fearful by inaccurate reports, which then becomes a cycle of fear”.

“In a positive way. We do see from time to time, but I love to see elderly people that study or still play sport rather than those that can’t pay their electricity bill. I do feel for those people but they also need to be seen as a positive influence on the community too”.

“More happy and loving towards their families. Also, my grandparents have an iPad each and a DS each, so they need to be shown on ads using technology”.