A last resort? - Summary Guide: About the Inquiry

The Human Rights and Equal Opportunity Commission was

established in 1986. It is an independent statutory organisation and reports

to the federal Parliament through the Attorney-General.

The Commission's goal is to foster greater understanding

issues facing a broad range of individuals and groups.

When the Commission was established it was given a responsibility

to advise the Commonwealth Government on Australia's commitments under

international laws and whether these are reflected in Commonwealth laws,

announced that the Commission would hold a National Inquiry into Children

Why did we hold an Inquiry?

Since 1992, asylum seekers who arrive in Australia without

a visa - both adults and children - have been subject to mandatory detention.

In all but a few rare cases, their detention ends only when they are recognised

From 1999 the number of children in detention rose significantly

and there was widespread concern about their treatment.

The Inquiry was established to examine whether the

laws requiring the detention of children and the treatment of children

law, especially the Convention on the Rights of the Child. 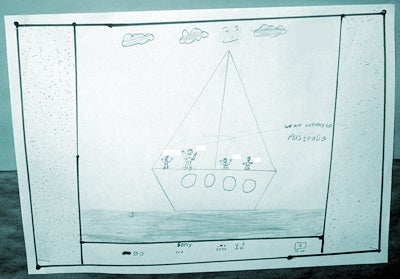 Drawing of a boat of children seeking asylum in

by a child in immigration detention

What did the Inquiry look at?

laws complied with international law and looked at alternatives to placing

The Inquiry also looked at the treatment of child asylum

seekers held in immigration detention centres between 1999 and 2002. In

Finally, the Inquiry considered the needs of child asylum

seekers and refugees living in the community after being released from