In Port Hedland there is a school

outside ... I used to stand on a chair and look out at them. I like

to see what they looked like in their school uniform. There was

the ground and said, ‘You are not allowed to look at those

people because they are different to you.’ And I was like

‘Why are they different to me? Because they know English and

they are Australian, does that make them better?’

All children in Australia have a right to education.

Under the Convention on the Rights of the Child, Australian governments

are required to provide, as a minimum, primary education that is 'compulsory

and available free to all' and secondary education that is 'available

and accessible to every child'.

All children in Australia, regardless of their nationality,

their immigration status, or how they arrived in the country, have the

The Inquiry looked at whether children in immigration detention

received a standard of education that was comparable to 'similar children'

in the Australian community. To help make this assessment, the Inquiry

children living in the community.

It is the responsibility of the Department to ensure that

Since 1999, most detainee children have had access to educational

programs inside detention centres. For several years, some detainee children

from some centres have attended local schools outside their detention

Since late 2002 this opportunity was extended to most detainee

children. However, as most children in immigration detention over the

period of the Inquiry attended internal detention centre schools, it was

important to examine the quality of that education.

How does the detention environment affect children's ability

When I first came here, we were

short … after that I became very upset and depressed and because

Children in detention often carry with them experiences

that make learning very difficult, such as the effects of past torture

and trauma. However, the detention environment itself makes learning even

Experts told the Inquiry that factors such as riots and disturbances,

moving from one compound to another, disruptions associated with arrivals

and releases and uncertainty over visa applications, all undermine the

Of most particular concern, however, was the mental health

of children, which deteriorated the longer they were in detention. Detainee

for them to concentrate and learn.

grew older because they felt depressed and because the classes didn't

The lack of adequate education

programs is a major issue.

More often than not no trained teacher [is] available, classes are

irregular at best, no curriculum, no subject programs or timetables

and no learning outcomes identified. This also has a negative impact

to occupy their time constructively.

Despite the significant efforts of teachers, the Inquiry

found that there were fundamental problems associated with providing education

services in on-site schools throughout the period of the Inquiry. These

Two other significant problems - the lack of an appropriate

curriculum and the shortage of teachers - are discussed below.

Many of these problems were substantially addressed

when, in 2002, the Department arranged for increasing numbers of children

There was no curriculum set

or advised by ACM or [the Department] ...

we were certainly given some classrooms to teach [in at Woomera]

and some materials in terms of white boards … but nothing

curriculum which is appropriate to the needs of children. It also requires

presented evidence to the Inquiry that the curriculum offered to detainee

children at on-site schools varied considerably over time and between

centres - however, it was often inadequate and unstructured.

a lack of age-appropriate teaching resources restricted children from

receiving an education suitable for their age and needs. This was a particular

There was only one class and

everybody like from five year old and I were put in the same class.

and these sort of things – basic mathematics.

Further, there were limited learning opportunities

post-compulsory schooling are available to children across Australia.

for adult detainees, which were generally inappropriate to these children’s

We had no computers. We had pens

and exercise books. We just copied from difficult books, some books

like dictionaries, just copying, then put in the rubbish bin. No

submission to the Inquiry

By late 2002, efforts were made to expand the curriculum

in some centres, particularly in Woomera and Baxter. However, this expanded

program was not given sufficient resources in the early stages.

Evidence to the Inquiry highlighted the significant shortage

of suitably qualified teachers in detention centres, particularly in Woomera

and Port Hedland, which at times had very large numbers of children.

For instance, there were 282 children at Woomera on 1 August

less. By contrast, there is one teacher for every 25 to 30 students in

were sometimes called upon to teach classes. Mostly they acted as teaching

This shortage of teachers also had an effect on the hours

approximately six hours of teaching each day. However, detainee children

fewer hours of tuition. For example, ACM documents show that during 2001

teaching hours at Woomera varied between one and three each day, depending

The high turnover of teachers also undermined the quality

and availability of education programs.

Finally, in some centres during 2002, teachers wore ACM uniforms

and security earpieces and consequently it was initially difficult for

Prior to 2002, education for detainee children largely took

place in on-site schools in detention centres. Some child detainees from

some detention centres were able to attend local schools in the community.

However the arrangements for this provision of external education were

From mid-2002, increasing numbers of children in detention

were allowed to attend local schools, after the Department began to negotiate

agreements with State and Territory education authorities. By the end

of 2003, the majority of children in detention were attending external

Evidence to the Inquiry was clear about the benefits - child

detainees are able to experience a 'normal day' outside the detention

centre, be taught a full curriculum, socialise with other children and

make new friends, all of which improves their well-being. The Department

Parents told the Inquiry that they preferred their

children to attend external school. However, these benefits can be offset

by the experience of returning to the detention centre each afternoon.

When we go outside we see the

children, they go out free, when they go back home, we have to come

back here. Sometimes they say to each other, ‘We’re

going to beach or somewhere else’ - we can’t go.

Not all children, however, were allowed to attend external

schooling. For example, at Curtin, ACM staff determined whether a child

could attend the local school, based on how well they thought the child

would cope, their level of English and their social skills. Children in

requirements such as these.

In addition, some older children aged 16 and above were denied

the opportunity to attend external schooling because of their age. Being

children, contributing to greater levels of depression which, in turn,

affected their ability to learn in the detention centre school. 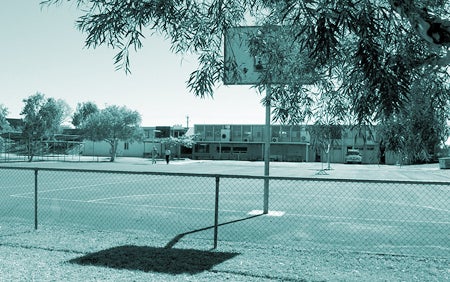 When did children in detention attend local schools?

The Commonwealth failed to take

all appropriate measures to provide children in immigration detention

with an adequate education over the period of the Inquiry, resulting

in a breach of the Convention on the Rights of the Child. Many problems