- either individually or as part of their family group - are generally

Since 2001, the conditions attached to the TPV mean that

children and their families:

After three years the TPV expires. At this time the child

their country of origin.

to integrate into the Australian community.

The first is that the temporary status of their residence

creates a deep uncertainty and anxiety about their future. This can exacerbate

existing mental health problems from their time in detention and their

past history of persecution. It also affects their capacity to fully participate

in the educational opportunities offered in Australia.

a brain tumour or something – you know that you are going

to die after three years. Even if you have a brain tumour, you know

happily. With this, you just die every day. You don’t know 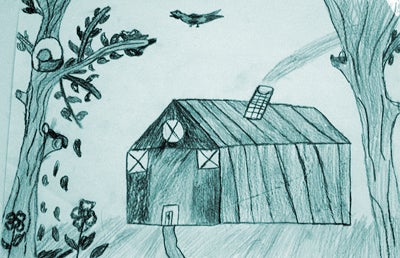 Drawing by a child detainee in Port Hedland

The second concern is that the absence of the right

to family reunion for the duration of the visa, combined with the effective

ban on overseas travel, means that some children may be separated from

their parents or family for a long, potentially indefinite, period of

time. Again, this can undermine a child's mental health and well-being,

Evidence to the Inquiry showed that unaccompanied refugee

children released from detention were generally well-cared for by State

agencies and that health, education and social services attached to temporary

visas satisfied the requirements of the Convention on the Rights of

However, limited settlement services, including initial

and families trying to integrate into the Australian community.

children released from immigration detention on TPVs can enjoy their

right to mental health, development, recovery from past trauma and