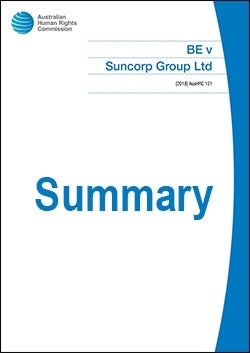 The President of the Australian Human Rights Commission provided a report to the Attorney-General in relation to a complaint by Mr BE against Suncorp Group Ltd.

Mr BE claimed that he had been discriminated against by Suncorp on the basis of his criminal record.

In November 2015, he applied for a job with Suncorp working from home as an insurance ‘claims assist consultant’.

Seven years previously, in March 2008, he had been convicted of accessing and possessing child pornography.  He was given a suspended sentence of 12 months imprisonment and was required to pay a fine of $5000 and make a payment to charity of $5000.  In 2015, he was convicted of failing to comply with his reporting obligations and fined a further $1000.

When he initially applied for the job online, he did not fully disclose the extent of his criminal record.  However, he disclosed his criminal record in advance of an interview for the job and prior to receiving a conditional offer of employment.  He also provided consent to a criminal history check being carried out.

After Suncorp received a copy of his criminal history check, it withdrew its conditional offer of employment.  It said that this was because of the nature of Mr BE’s criminal convictions and because there was an alternative internal candidate available.

Withdrawing an offer of employment on the basis of a person’s criminal record will amount to discrimination unless the refusal is based on the inherent requirements of the job.

Suncorp identified three aspects of the role that it considered Mr BE could not fulfil based on his criminal record.

The first was that the role involved dealing with confidential customer information.  Although Mr BE’s offences were very serious, they were not offences of dishonesty.  Immediately prior to applying for this role, Mr BE had worked for seven years as a caseworker for the Telecommunications Industry Ombudsman where he conciliated industry-related complaints and had access to the personal information of complainants and respondents.  He said that the TIO was aware of his criminal record while he was working there.  Neither the nature of his particular offences nor his personal circumstances meant that he would be unable to properly deal with confidential customer information.

The second identified aspect of the role was that it involved working unsupervised with technology and the internet.  However, remote staff of Suncorp have their internet usage monitored by the company’s IT team in the same way as office-based workers when accessing the internet through the company’s systems.

The third identified aspect of the role was that Suncorp had a number of community partnerships including with a community organisation promoting the wellbeing of young people.  However, the role that Mr BE applied for did not require him to participate in these community partnerships.  It could not be said that the existence of these partnerships meant the Mr BE could not perform the inherent requirements of the work from home role.

The President of the Commission was not satisfied that Mr BE was unable to fulfil the inherent requirements of the role of a work from home insurance claims assist consultant.  As a result, she found that the withdrawal of the conditional offer of employment amounted to discrimination.

When the Commission makes a finding of discrimination, it may make recommendations including the payment of compensation and the taking of steps to prevent similar conduct occurring again.  These recommendations are not enforceable.  In accordance with the approach in previous matters, the President recommended that Suncorp pay Mr BE $2500 in compensation for ‘hurt, humiliation and distress’ and that it reassess its policies in relation to prevention of discrimination on the basis of criminal record.

Suncorp declined to pay compensation to Mr BE on the basis that it disagreed with the Commission’s findings.  It said that, notwithstanding this disagreement, it has developed comprehensive recruitment procedures and provides on-going training to employees, including in relation to anti-discrimination and equal opportunity.  Suncorp said that it would consider the Commission’s publication, On the Record: Guidelines for the Prevention of Discrimination in Employment on the Basis of Criminal Record, as part of its ongoing review of procedures and training, and that it was committed to ensuring fair and non-discriminatory methods of assessing a prospective employee’s criminal record against the inherent requirements of the role.

This summary is not intended to be a substitute for the reasons of the Commission.  A full copy of the reasons is available here.

This complaint was received by the Commission prior to amendments to the Australian Human Rights Commission Act 1986 (Cth) made in 2017.