IN THE HIGH COURT OF AUSTRALIA

AT MELBOURNE OFFICE OF THE REGISTRY

2. The exercise of the discretion to decline jurisdiction

When confronted with proceedings invoking the parens patriae powers (such as wardship applications and writs of habeus corpus), it has repeatedly been held that a court should be slow to abdicate jurisdiction: McKee -v- McKee, at p.364.; In re Kernot (An Infant) [1965] 1 Ch 217, at pp. 222-223.

3.3 When considering the best interests of the child, the following factors require serious consideration, but are not, of themselves, determinative:

4. Some English judges have held that in an abduction case, the child should, without further inquiry, be returned to the foreign jurisdiction unless there is evidence that they will face obvious moral or physical danger or otherwise suffer harm: In re S (M.) (An Infant), at p.625; In re H.(infants.), at p.889. It is submitted that this approach is inappropriate in a welfare jurisdiction. The English Court of Appeal has expressly disapproved of this approach: In re C. (Minors) [1977] 3 WLR 561, per Lord Omrod at pp.567-568. Re R (Minors) [1981] 2 FLR 416, at p.425.

2. Exercise of the discretion to decline jurisdiction

2.1 When a court's parens patriae power is invoked, the paramount consideration becomes the welfare of the child. A court may in the exercise of its discretion decline to undertake a full investigation of the child's welfare and instead order the return of the child to the foreign jurisdiction. This can only occur, however, once the court has exercised its jurisdiction to the extent of determining that this course is in the best interests of the child: McKee, at pp.363-4; Burgess, at pp.493-494 and at p.506; Charmasson, at p.79, Menasce, at p.119; Re Hjorleifson and Gooch (1986) 28 DLR (4th) 134, at p.139.

3.3 In circumstances where there are extant orders of a foreign court or where proceedings have been initiated in the foreign jurisidiction in which the child was most recently resident, this will be a not insignificant factor in assessing what is in the best interests of the child and may consequently reduce the extent and scope of the merits investigation: Burgess, at p.493 and p.506; Charmasson, at p.79; McKee, at p.365; Dalshaug .-v­ Dalshaug, at p.4.77.

3.4 Although the best interests of the child is the paramount consideration, the proper or fair administration of justice is also a factor to be considered. A combination of these considerations may dictate an order for the return of the child, provided no harm or detriment would occur in so doing: Burgess, at p.495 and p.506; Dalshaug, at p.477; Re Hjorleifson, at p.139; and Re Loughran and Loughran, at p.386.

1.1 The Guardianship Act 1968 (NZ) (the "Act"), which came into effect on 1 January 1970, declares at s.33 that henceforth, "[E]xcept as otherwise expressly provided in this Act, the provisions of this Act shall have effect in place of the rules of common law and of equity relating to the guardianship and custody of children." The parens patriae power was not specifically preserved, although the High Court's wardship jurisdiction remains in tact: s.9 of the Act.

1.2 In any event, section 23 of the Act provides that in any proceedings involving the custody or guardianship of a child, the Court shall regard the welfare of the child as the first and paramount consideration. The Court shall have jurisdiction under the Act whenever the child is "present", resident or domiciled in New Zealand at the time of the application to the Court: s.5 of the Act.

2. Exercise of the discretion to decline jurisdiction

2.1 "Where an application for custody is made to a New Zealand court by a person who has abducted the child from another country for the purpose of defeating an order made in that country but not registered in New Zealand or for the purpose of preventing the exercise of access, the New Zealand court will normally assume jurisdiction and inquire into the merits rather than simply order the return of the child.": Family Law Guide, Professor PRH Webb et al, Butterworths, Wellington, 1991, at p.264; Re B (Infants) [1971] NZLR 143, at p.145.

3.1 In Re B (Infants), the Court of Appeal affirmed that in view of s.23 of the Act, the judgment of Lord Simonds in McKee -v- McKee [1951] AC 352 described the proper approach for the New Zealand courts in child welfare cases involving abduction: at p.145. Once it is established that the Court has jurisdiction, the welfare of the child is the paramount consideration: E -v- F, at p.441; Howett -v- Howett (1988) 5 NZFLR 161; McGowan -v- Chorba (1989) 5 NZFLR 417. It has been held by the Court of Appeal [Re B (Infants)] that "... the statutory mandate to treat the welfare of the child as the first and paramount consideration applies in this situation [abduction] and requires an investigation into the merits unless in the circumstances it can be said that the best interests of the child will be served by simply giving effect to the overseas order.": Family Law, at pp.264- 265. See also E -v- F [1974] 2 NZLR 435, at p.438.

3.2 As the Privy Council explained in McKee, there will be situations where the best interests of the child dictate the speedy return to the place of most recent habitual residence of the child. C -v- C [1973] 1 NZLR 129 is one such example.

3.3 In C -v- C, the Court suggested that the weight to be accorded to a foreign court order is influenced by the status of that court, the nature of the hearing and the system of law employed in that country: at pp.130-131.

THE HAGUE CONVENTION ON THE CIVIL ASPECTS OF INTERNATIONAL CHILD ABDUCTION 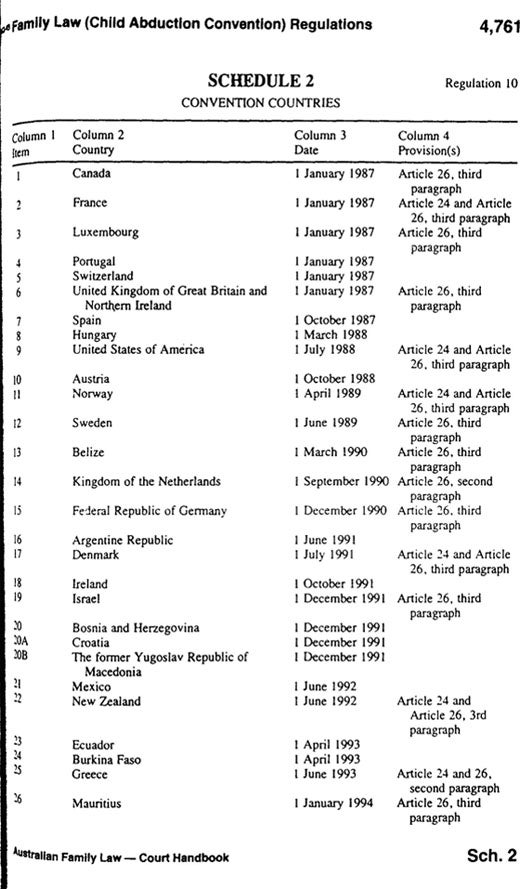