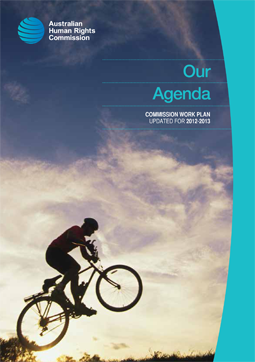 What are human rights?

Human rights are our entitlements to have our dignity and worth as human beings recognised. We all have them, we all want them recognised in our friends and families, and we all have responsibilities to recognise them in others.

Set out in a number of international treaties, human rights are an expression of how people ought, and ought not, to be treated – by individuals, by government, and by the community at large. The Australian Government has agreed to uphold and protect many of these rights. Consequently, our national human rights laws provide legal protection to people who have been treated unfairly. They also set concrete standards for all of us to follow. 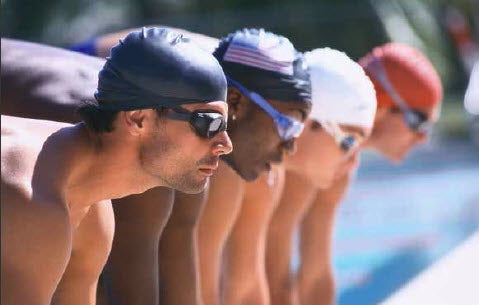 The role of the Australian Human Rights Commission is to see that these commitments are understood and recognised in practice. Independent from government, established by legislation, and recognised internationally as an ‘A Status’ National Human Rights Institution, the Commission – through its President, Commissioners and a network of staff – strives to resolve complaints, encourage reform and build recognition of our shared humanity.

Operating under the Australian Human Rights Commission Act 1986 (Cth) as well as federal laws that protect people from discrimination such as on the basis of their age, disability, race or sex, the Commission also has specific responsibilities under the Native Title Act 1993 (Cth) and the Fair Work Act 2009 (Cth). Within this broad framework, our job is to work towards an Australia in which the human rights of all are respected, protected and promoted – finding practical solutions to issues of concern; advocating for systemic change; and increasing understanding across the community.

Much of this work is at the public advocacy and policy level – engaging with the public and the media; and encouraging government, industry and community groups alike to aspire to more. It involves building the case for change on issues ranging from paid parental leave to age discrimination in employment. It means presenting to parliamentary inquiries, making submissions, supporting our arguments with research, and contributing to partnerships. Our work also involves exchanging ideas with equivalent bodies around the world; while, closer to home, we monitor and report on the experiences of those particularly vulnerable to disadvantage.

From addressing individual cases of discrimination, to engaging with government around policy, the Commission’s task is both to apply those rights that are currently recognised in our laws; and to aspire for greater recognition and protection of those that are not. Our vision is for an Australia where human rights are enjoyed by everyone, everywhere, everyday.

This document provides an overview of the Commission’s major activities for
2012-13.

The Commission regularly reviews the ways in which human rights are being observed and respected across Australia. We do this to determine where we can take practical action and make a positive difference.

Our work is organised according to the following two priorities and five functional areas. 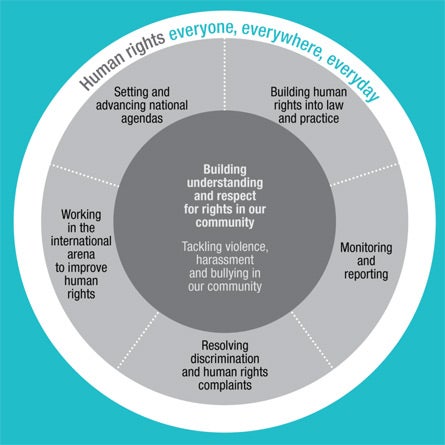 At home, at work, at school, online or on the street – violence, harassment and bullying can violate a person’s right to feel safe and respected. Experienced by many Australians, these damaging behaviours can also affect people’s physical and psychological health – undermining their ability to participate in employment, education, or community life.

That’s why it’s vital that we replace fear and isolation with safety and inclusion. Given that discrimination can often play a major role in acts of violence, harassment and bullying, the Commission knows how essential it is to address the underlying causes of these attitudes and behaviours. 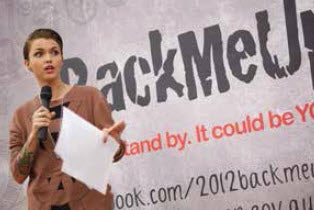 All Australians can play a part in this, with evidence emerging about the valuable role of the bystander in addressing any bullying and harassment that they witness. That is why this year, we will:

To promote this campaign a competition through Facebook is encouraging teenagers to make a video about how they could help someone who is being cyberbullied. Ten winners, announced in September, will spend a week at NIDA in Sydney, learning how to make a short film.
The Sexual Harassment Prevalence Survey results will be released in two stages. The findings relating to the Australian Defence Force will be released in August, with the main findings released later in the year.

Meanwhile, racism and prejudice continue to be experienced by people from across all sectors of the community. That is why this year, we will:

The Commission was asked by the federal government to lead the development of the National Anti-Racism Strategy.

Working in partnership with groups across the country, consultation on the Strategy enabled the voices and experiences of people from across the breadth of the community to be heard, often for the first time.

One participant explained that a measure of the Strategy’s success would be:

‘A dark skinned woman wearing a veil will not cause a second thought; a dark skinned male wearing a hoodie will not be suspected; our kids will experience diversity ... and not even notice.’

‘Human rights was an abstract concept but now I have a solid understanding of it and know it underpins every aspect of a human being’s life. I also realised that all polices should be rights based rather than welfare based.’
- Human Rights and Advocacy for Muslim Women training course participant

Priority 2: Building understanding and respect for rights
in our community

The examples listed above demonstrate just some of the ways in which the Commission is working to build a respectful community. We all share in this obligation, but to see this realised we need to build wider understanding of how the concept of human rights applies to everyday life.

That is why the Commission is delivering community engagement and education programs which help to translate human rights values into practical reality, using social media and other tools to reach the breadth of the population. We are highlighting that equality, respect and fair play have application in all life stages –
in the playground, in the classroom, in the workplace and in the wider community.

The Commission is also working with the Australian Government to help implement its 2010 Australian Human Rights Framework, which guides the Government’s commitment to human rights. 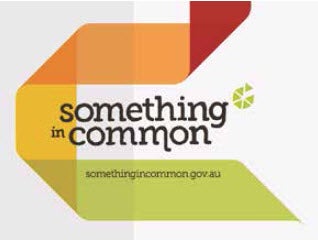 For example, the online platform Tell me something I don’t know shares compelling and sometimes confronting facts in a concise and accessible way that debunks many assumptions in the community – including the following: ‘Jaywalking is illegal. Getting on a boat and asking Australia for protection is legal.’

Meanwhile, the platform Something in common shares the story of human rights in Australia and celebrates ordinary people doing extraordinary things. This site has attracted over 22,000 visitors since it was launched. 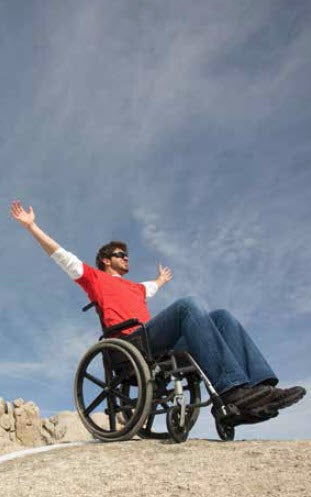 Twenty stories (10 short films, 10 community videos) will be made and launched by the Governor-General on 1 March 2013. The stories will portray people who have used the Disability Discrimination Act 1992 (Cth) to improve the lives of people with disabilities around Australia.

Working together for change

There is no simple way to solve complex human rights issues. From the challenges that face a person with a disability seeking independent living, through to immigration detention policy, the promotion of human rights must address both individual need and systemic change. That is why the Commission uses a range of approaches, recognising that enduring challenges require sustained energy and commitment.

To be as effective as possible, our work is structured around the following functional areas.

One of the Commission’s tasks is to draw national attention to areas in which human rights are not being properly recognised or respected.

As a result, we undertake research, provide advice, review laws, engage in public inquiry processes and work with groups from across the community to pursue reform. We develop partnerships and take a constructive approach to help us contribute to practical change.

On 25 June 2012, the Australian Parliament passed legislation to establish Australia’s first National Children’s Commissioner. The new Commissioner will be an advocate for the human rights of children, promoting public awareness, consulting directly with children and representative organisations, conducting research and education programs, as well as monitoring relevant Commonwealth legislation, policies and programs. The Commissioner is expected to take office by the end of 2012 / early 2013.

Some people in Australia are especially vulnerable to discrimination, exclusion and unfair treatment. The Commission has a particular responsibility to monitor their experiences, identify issues of concern and propose solutions that will lead to improvement.

Sometimes we do this by holding national inquiries that examine these concerns in detail. We also undertake regular monitoring and reporting work, such as the Social Justice Commissioner’s annual Social Justice Report and Native Title Report on issues affecting Aboriginal and Torres Strait Islander communities. 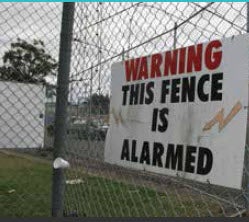 We also have a long-standing role of monitoring Australia’s immigration detention system and treatment of asylum seekers, through visits to detention facilities, public awareness raising and engagement with the government, NGOs and community groups. We advocate for reforms to the system of mandatory and indefinite detention, and for greater use of community-based alternatives to holding people in closed detention facilities for prolonged periods.

We believe that human rights protection needs to be a central part of laws, policies and practices in order to build a fairer and more inclusive Australia.

In addition to this public advocacy work, the Commission has an equally important role in resolving individual claims of discrimination and other breaches of human rights. Through our complaints service, people can have their disputes addressed constructively and efficiently, seeking redress for discriminatory behaviour in a way that may also lead to benefits for others. Further, by appearing as amicus curiae, or ‘friend of the court’, to provide specialist advice in discrimination cases, the Commission helps to inform the understanding of relevant law as it evolves.

We also have an important role to play in the United Nations system, regularly providing independent reports which describe how Australia is progressing in relation to meeting its human rights obligations.

Taking stock in this way helps to highlight any gap between our international commitments and the domestic reality, contributing to wider awareness of the challenges that remain. 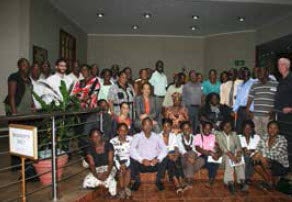 ‘... evaluation is now embedded in all Commission activities and processes – this has entailed a major cultural shift.’
- Evaluation at the Commission, staff survey

In July 2011, we introduced a new Strategic Plan. It commits us to working collaboratively, innovatively, and to the highest standard of excellence. The Strategic Plan provides a framework to enable us to:

We also strive to lead by example – by being transparent and accountable, and by operating in accordance with the human rights standards that we expect of others. We seek to minimise our environmental footprint and to practice and inspire sound corporate social responsibility.

'Staff acknowledge the importance and accessibility of this flexibility with an 83% positive response in our most recent employee survey.'
- Human Resources, Commission staff survey

The work of the Commission is led by a President and Commissioners:

It is anticipated that the inaugural National Children’s Commissioner will commence at the Commission in late 2012 / early 2013. 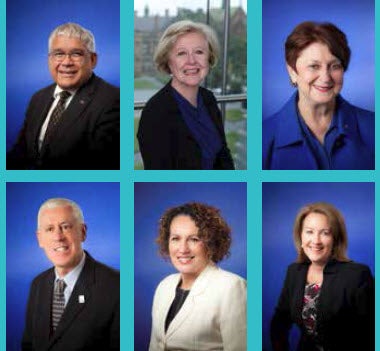 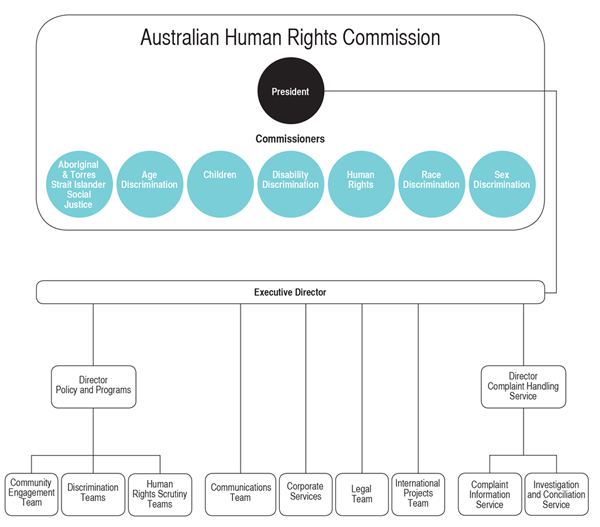