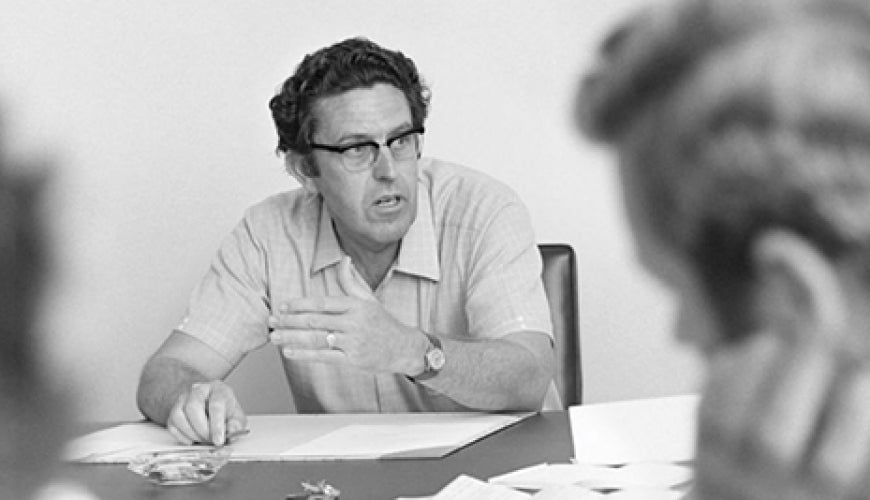 The Lecture is delivered annually by a leading figure to advance public understanding and debate about racism, race relations and the Racial Discrimination Act. 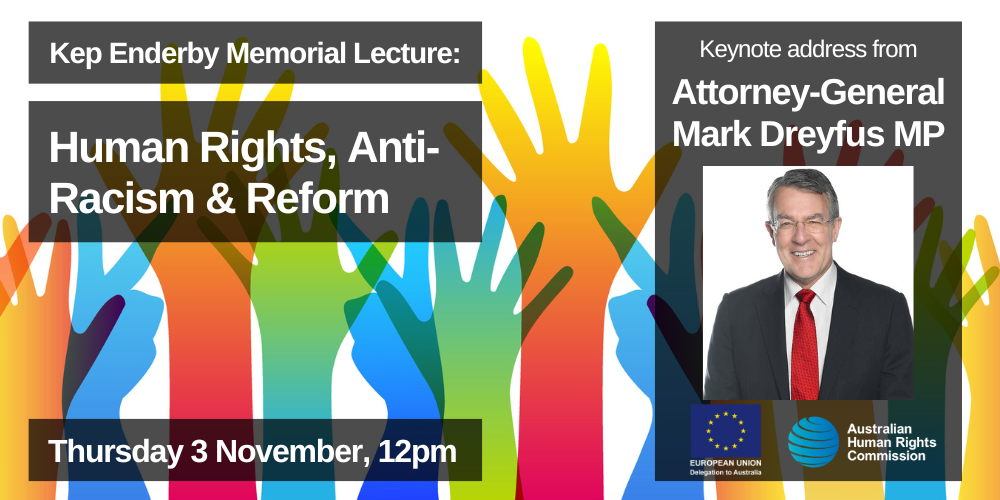 The Australian Human Rights Commission has held its annual Kep Enderby Lecture, with this year’s keynote address given by the Attorney-General of Australia, The Hon Mark Dreyfus KC MP

We stand at an important moment in our nation’s development. The challenges we face to maintain a peaceful, harmonious, multicultural society are many. To ensure a country free of racial discrimination in which everyone has every chance to fully participate in society, we need to move from a space of ‘safe’ to ‘brave’ on issues affecting those who experience discrimination.

This lecture was an opportunity to hear from the Attorney-General on the Australian Government’s vision to advance human rights. The AG spoke to the Government’s commitments on:

Following the Memorial Lecture, several leading experts formed a panel to discuss online hate and the need for legislative and other reforms.

The Australian Human Rights Commission has held its annual Kep Enderby Lecture, with this year’s keynote address given by acclaimed author Alice Pung.

The theme of the lecture was Embracing Cultural Diversity in Australia, and a panel discussion followed the lecture with panellists Kupakwashe Matangira, Zaahir Edries and Jidah Clark.

In her address, Ms Pung spoke powerfully about the power of language and the role it plays to both re-enforce and breakdown racial barriers.

“Australia is culturally diverse. That’s a given. But language is used to lock the working-class out of discussions about race.” said Ms Pung.

“You can’t just throw a book at someone and rail at them for being stubbornly ignorant for refusing to read it, when they work with their hands. They might’ve been fixing their Sri Lankan neighbour’s tap for free for the past six months. They might know this stuff already, innately, from working in a production line with Burmese refugees.

These were the central questions for panellists during the 2020 Kep Enderby Memorial Lecture, which the Australian Human Rights Commission presented in partnership with the European Union Delegation to Australia.

Mr Dini, a resident in the Melbourne towers that were subjected to a hard lockdown in July, said: “The year of COVID has shown the fault lines and also the pre-existing racism that exist within our society.”

He said the lockdown his community experienced “was the harshest and the hardest lockdown anywhere in the western world… and the reason we were all punished in this way is because we were seen as second-class citizens.”

Panellists discussed the significance of identity and storytelling in this context. They said stories about Australian values must be broadened out to include more diverse groups, because when only narrow stories are seen to represent Australian values it has the effect of ‘othering’ diverse communities.

The 2020 Kep Enderby Memorial Lecture was sponsored by the European Union Delegation to Australia. 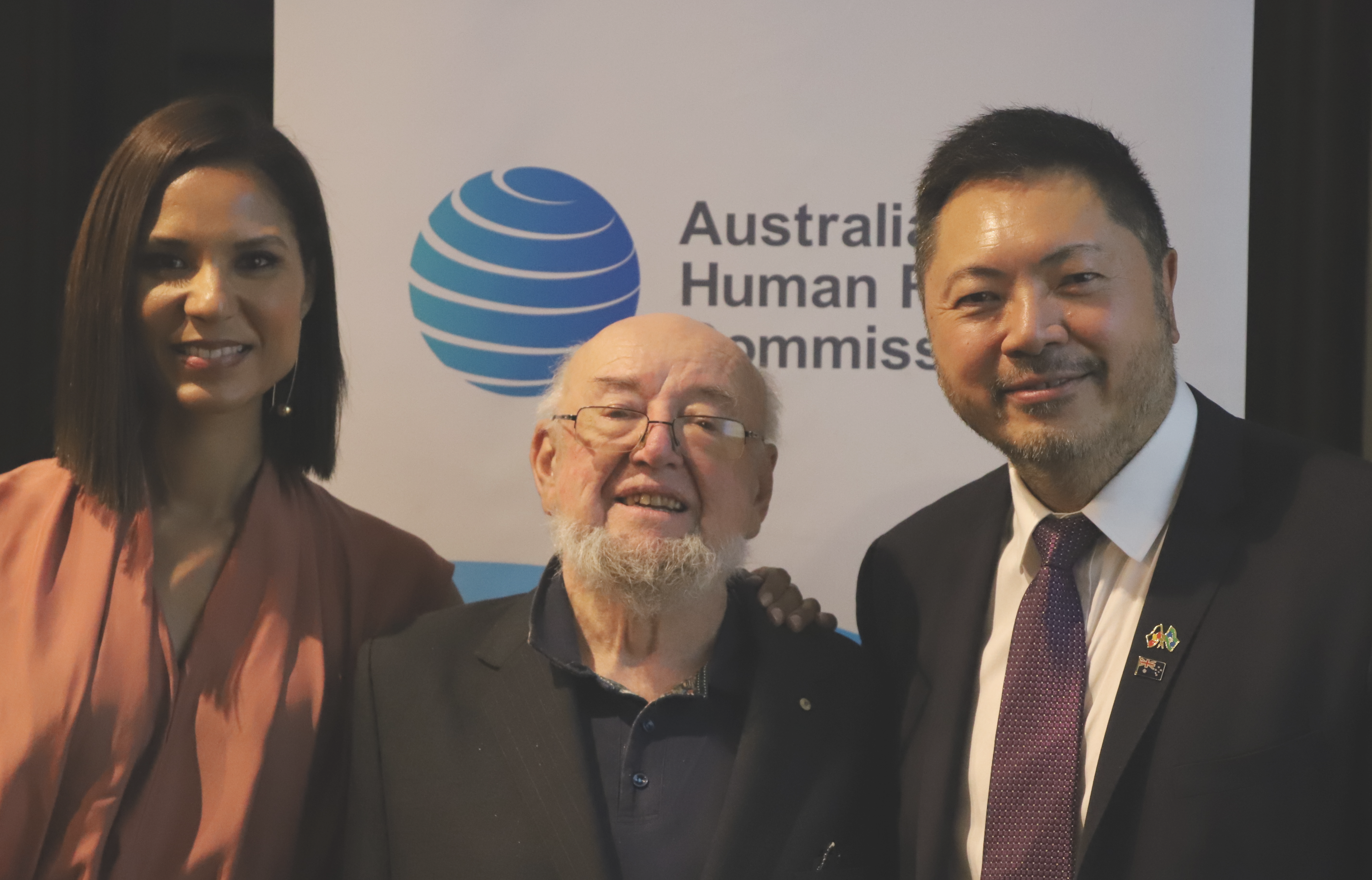 The fifth annual Kep Enderby Memorial Lecture was given by Thomas Keneally AO, one of Australia’s best known and prolific writers. For the first time the lecture was followed by an in-depth conversation between Thomas Keneally and SBS World News presenter Janice Petersen.

Abstract: Mr Keneally’s lecture explores the history of race relations in Australia as seen through his eyes over the last several decades.

Thomas Keneally AO is one of Australia's best known and prolific writers. He was born in 1935 and has written close to sixty novels and non-fiction works. He won the Booker Prize in 1982 for Schindler’s Ark, based on the life of Nazi Party member Oskar Schindler, who saved 1,200 Jews during World War II.

Tom has also won the Miles Franklin Award, the Los Angeles Times Prize, the Mondello International Prize, the Helmrich Award (US), the Trebbia International Prize from the Czech and Slovak governments. He has also been made a Literary Lion of the New York Public Library. He is recipient of the University of California gold medal, is an Officer of the Order of Australia, a National Living Treasure, and is now the subject of a 55 cent Australian stamp.

Tom is an ambassador for the Asylum Seekers Centre and recently co-authored A Country too Far, an anthology by 27 of Australia's finest writers about the asylum seeker experience.