National Anti-racism Strategy and Racism. It Stops With Me Summary Evaluation and Future Direction 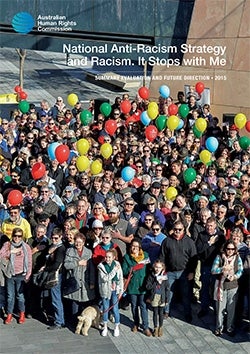 The National Anti-Racism Strategy was developed with a number of aims. It was about helping people to understand what racism is and why it is a problem. And it was about empowering people to prevent racism from happening and to reduce it in their communities.
Almost three years on from its launch in August 2012, we can report on the Strategy’s success.

But we do so in the knowledge that more remains to be done.

Tackling racism is by no means a simple task. Prejudice and discrimination can be a product of ignorance and arrogance just as much as hatred and fear. It can be crude as well as subtle, systemic as well as casual. Getting people to have conversations about race can, as most of us would know, be a fraught business.

This report reviews and evaluates the National Anti-Racism Strategy and the Racism. It Stops with Me campaign. It shows that the Australian Human Rights Commission has been able to do ‘a lot with a little’. We have done so by creating a network of partners and supporters, and by encouraging communities to be part of a national campaign.

I thank all of our partners: the Attorney-General’s Department, the Department of Social Services, the Department of Prime Minister and Cabinet, the Federation of Ethnic Communities’ Councils of Australia, the National Congress of Australia’s First Peoples and the Australian Multicultural Council. My thanks also to our Racism. It Stops with Me campaign ambassador, Adam Goodes.

Thanks as well to all of our campaign supporters. We have received great community support – to date, more than 360 organisations have formally signed on to the campaign, and we have the support of many more individuals.

Of course, the true success of our work cannot be measured in numbers. It is about starting conversations, be they in boardrooms, classrooms or living rooms. It is about getting people to reflect on what they can do to combat prejudice and discrimination.

This evaluation report has informed the planning of the next phase of the Strategy and campaign.

The Commission will build on our work in the areas of employment, education, media, government service provision, sport and the online environment. Our future work will be guided by two themes:

We also look forward to expanding the National Anti-Racism Partnership.

The National Anti-Racism Strategy has started a national conversation about race in this country. I look forward to continuing that discussion.