Rights and Freedoms
This page contains information about Australia's first (2011) and second (2015) cycles of the Universal Periodic Review. You can find information on Australia's third cycle of the UPR in 2021 here. 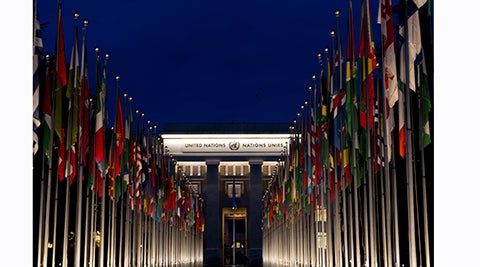 What is the UPR?

The Universal Periodic Review (UPR) is a process undertaken by the United Nations (UN) Human Rights Council. It involves review of the human rights records of all 192 UN Member States once every four years.

The UPR is an opportunity for Australia to:

The UPR is a peer review process. Recommendations on actions Australia should take are made by individual governments of other states. They are not made by the UN or the Human Rights Council as a whole.  Recommendations made by governments of countries with which Australians would choose to compare ourselves (for example the US, Canada, UK, New Zealand or European Community members) are particularly important as they avoid the criticism that they are without credibility because they have been made by countries with questionable human rights records.

Australia has undergone two reviews (see information below). Australia's third cycle review is scheduled for the 37th Session of the UPR Working Group in October-November 2020. Information on the third cycle will be uploaded to the website as it becomes available.

Where can I find more information on the UPR?

More detailed information on the UPR process is available in the Commission’s UPR Frequently Asked Questions and Answers.

Second Cycle of the UPR

Australia's review under the second cycle of the UPR took place on 9 November 2015.

The Australian Government Report to the Second UPR was submitted in July 2015.

The UPR review was based on the Government report together with the following information:

110 countries spoke at the review and provided 291 recommendations. The Australian Government provided Australia’s response to the Report of the Working Group on the UPR at the 31st Regular Session Human Rights Council (17 March 2016). 150 recommendations were accepted, 50 were noted to consider further and 90 were noted.

Each of these documents is available in the key documents below.

First Cycle of the UPR

Australia appeared before the United Nations Human Rights Council’s Working Group on the UPR on 27 January 2011.

53 countries asked Australia about its human rights record and made 145 recommendations. These covered a wide range of human rights issues including the treatment of asylum seekers, Aboriginal and Torres Strait Islander peoples, multiculturalism and racism, and the status of Australia’s obligations under international human rights law.

Over 90 per cent of recommendations were accepted in full or in part by the Australian Government.  Australia also made a number of voluntary commitments during the dialogue.

The Australian Human Rights Commission reported annually on the status of implementation of the 1st cycle UPR recommendations.  These reports were prepared on behalf of the Australian Council of Human Rights Agencies (ACHRA), a body that brings together all Commonwealth, State and Territory anti-discrimination and human rights bodies.

The reports were an annual reflection on Australia's progress in addressing commitments that the Government made to protect human rights from the 1st cycle review, as well as means of identifying emerging and ongoing concerns.

Each report was lodged with the UN Human Rights Council as part of its ongoing monitoring of Australia's UPR implementation.

The Commission will be working with Government and Civil Society to develop a mechanism to monitor implementation of the accepted UPR 2nd cycle accepted recommendations. This section will be updated as new information becomes available.