Freedom from interference with privacy, family, home and correspondence or reputation 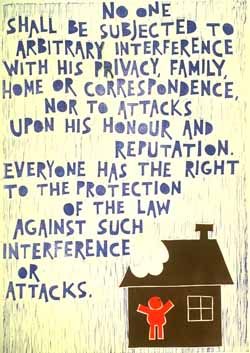 The Privacy Commissioner takes the lead role on information privacy issues. Some other aspects of privacy however (including those which have been referred to as a "right to private life" are less clearly covered by the Privacy Act and the Commission has had a more substantial continuing role regarding these issues

In 1999, Mr Edward Young took a complaint against Australia to the Human Rights Committee. Under the then current Australian veterans’ entitlements laws, same-sex couples were not entitled to the same veterans pensions as opposite-sex couples.

The Committee found (PDF) that Mr Young had been discriminated against under Article 26 of the ICCPR and was entitled to an effective remedy, including the reconsideration of his pension application.

Australia argued that Mr Young had not exhausted domestic remedies as he had not pursued his claim through the AAT or the courts. The Committee rejected this argument, noting that Australia had no court or tribunal with the capacity to overturn legislation on the grounds of it being in breach of human rights. The Committee reaffirmed its view that Article 26 includes discrimination on grounds of sexual orientation.

The Committee noted that the State party [Australia] is obliged to ensure that similar violations of the Covenant do not occur in the future.

While the State party acknowledges that the impugned provisions constitute an arbitrary interference with Mr. Toonen's privacy, the Tasmanian authorities submit that the challenged laws are justified on public health and moral grounds, as they are intended in part to prevent the spread of HIV/AIDS in Tasmania, and because, in the absence of specific limitation clauses in article 17, moral issues must be deemed a matter for domestic decision.

The Committee cannot accept either that for the purposes of article 17 of the Covenant, moral issues are exclusively a matter of domestic concern, as this would open the door to withdrawing from the Committee's scrutiny a potentially large number of statutes interfering with privacy. It further notes that with the exception of Tasmania, all laws criminalizing homosexuality have been repealed throughout Australia and that, even in Tasmania, it is apparent that there is no consensus as to whether sections 122 and 123 should not also be repealed. Considering further that these provisions are not currently enforced, which implies that they are not deemed essential to the protection of morals in Tasmania, the Committee concludes that the provisions do not meet the "reasonableness" test in the circumstances of the case, and that they arbitrarily interfere with Mr. Toonen's right under article 17, paragraph 1.