Back to rights and freedoms:right by right 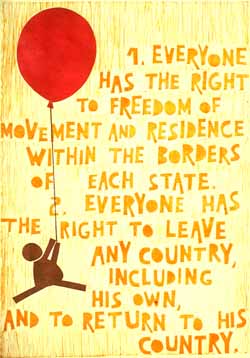 The right to freedom of movement within a country, which includes the right to choose where to live within the country

People must be able to move freely and choose a place of residence within a country without restrictions, including establishing a purpose or reason for doing so. The only allowable restrictions are those mentioned in article 12(3) (see further detail below). Governments have a duty to ensure that a person's freedom of movement is not unduly restricted by others, including private persons or companies. The right applies to all persons lawfully within Australian territory, not only to Australian citizens.

International law does allow a country to impose restrictions on who may enter it. A country may allow entry to a non-citizen on conditions that allow the person lesser rights of freedom of movement to those of citizens, provided those restrictions comply with the country's international obligations. For example, some work visas impose conditions on a visa holder to reside and work in a particular region. However, a non-citizen lawfully within Australia whose entry into Australia has not been subject to restrictions or conditions is entitled to the same right to freedom of movement as an Australian citizen.

The right to leave any country, regardless of your citizenship

The freedom to leave a country pertains to both short-term, long-term and permanent departures. It cannot be made dependent on establishing a purpose or reason for leaving. Citizens have a right to obtain passports or other travel documents from their country of citizenship. The right to leave, and to possess a passport, may be restricted, most notably if the person's presence is required due to their having been charged with a criminal offence.

The UN Human Rights Committee has stated that in no case may a person be arbitrarily deprived of the right to enter his or her own country, and that there are few, if any, circumstances in which deprivation of the right to enter a person's own country could be considered reasonable. This component of the right is generally restricted to citizens. Australian citizenship may be revoked by the Minister for Immigration and Citizenship in the circumstances set out in section 34 of the Australian Citizenship Act 2007.

Complaints have been made to the UN Human Rights Committee by persons who have been ordered to leave countries in which they have been long-term residents, but not citizens, for example because they have committed serious criminal offences. The complaints have alleged that the country of long-term residence should be considered the person's 'own country'. So far, no such complaint has been successful, although individual members of the Committee have dissented from the views of the majority.

This  right can be restricted on any of the grounds in article 12(3) of the ICCPR, namely national security, public order, public health or morals or the rights and freedoms of others. The Human Rights Committee has stated that restrictions should not only serve the permissible purposes; they must also be necessary and proportionate to protect them and must be the least intrusive means of achieving the desired result. Examples of measures likely to constitute permissible restrictions are those on persons charged with or convicted of criminal offences, access to areas of environmental significance, access to areas such as quarantine zones and prohibitions on unlicensed access to private premises, particularly where such access would interfere with the right to privacy of the owner or occupier of the premises.

In addition, Australia's obligations under the Hague Convention on the Civil Aspects of International Child Abduction provide an obligation on Australia to take measures to seek the return of children wrongfully removed or detained from their country of habitual residence. In fulfilling Australia's obligations under this and other conventions, Australian authorities are required to both actively prevent the wrongful removal of children from Australia and to actively seek the return of children who have been wrongfully removed.

Disability and freedom of movement

Freedom of movement needs to be available in practice as well as in law. The CRPD sets out in more detail the implications of this point including in Articles 9 and 20.

Deportation on character grounds (extensive record of serious criminal charges) of non-citizen who had lived almost all of his life in Australia. Committee (with 5 members dissenting) found breaches of ICCPR article 12.4. Discussion of concept of person's "own country".