Freedom of thought, conscience and religion or belief 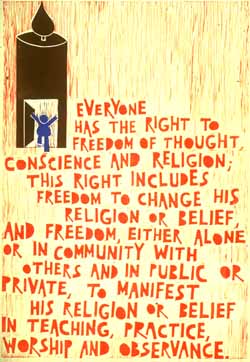 Article 18 of the ICCPR states:

The Human Rights Committee has made extensive comments in its General Comment No. 22: The right to freedom of thought, conscience and religion. Headings and notes have been added here to sections of this Comment for ease of reading.

Freedom of thought, conscience, religion and belief is fundamental

"​Belief" and "religion" should be interpreted broadly

Manifestation of religion or belief must not may amount to propaganda for war or advocacy of hatred that constitutes incitement to discrimination, hostility or violence

[Note: In ratifying the ICCPR Australia reserved the right not to introduce further laws to implement Article 20. It did not reject the substance of Article 20, but indicated (as the Human Rights Committee has also said) that Article 20 should be interpreted consistently with Article 19. }

[Note: For further information in this area see the notes on this site on Permissible limitations on freedom to manifest religion or belief  and Balancing freedom of religion and other rights: European approaches . ]

Conscientious objection to military service must be accommodated

See our freedom of religion and belief project page for links to projects, speeches and papers

Freedom of religion and belief in Australian law

While there is some protection given to religious freedom in the Australian Constitution, it is far from comprehensive. Section 116 prohibits the Commonwealth Parliament from enacting legislation that would prohibit the free exercise of religion or establish a religion. This constitutional protection is, however, limited in a number of ways.

Interpretation of s116 by  the High Court has in most respects been restrictive and limiting.

Rejection of proposals for a Bill of Rights to give effect to Australia's obligations under the ICCPR, and of the proposal by the Commission for specific Religious Freedom legislation, means that  there is no comprehensive Commonwealth legislation that protects religious freedom or prohibits discrimination on the basis of religion or belief.