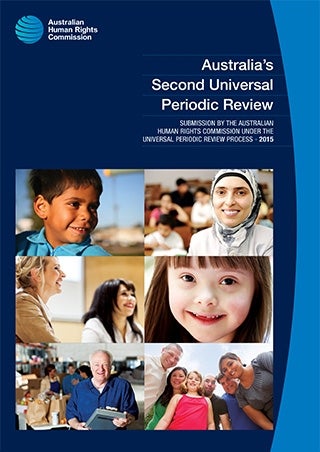 Australia’s human rights record will be the subject of a global dialogue between governments at the United Nations (UN) Human Rights Council in November 2015 when Australia participates in the Universal Periodic Review (UPR).

The UPR is a unique process. As its name suggests, it is a universal process, which all countries in the world participate in and which considers progress in the realisation of all human rights; periodic in nature, occurring every four years; and a review, identifying the key challenges and achievements of each member of the UN.

The UPR complements the other processes at the UN level that provide accountability for human rights outcomes – such as the monitoring role of treaty committees and the thematic work of special rapporteurs and other procedures. How it differs is that rather than the dialogue being between independently appointed experts and the government, it is a diplomatic engagement between nations.

As a peer review process, it enables Member States to ask questions about the human rights situation in the country under review and to make recommendations for priority actions. The country under review is required to indicate whether it will implement the recommendations made over the subsequent four year period, or not. Often, the issues that are raised in this process are followed up through bilateral dialogue and diplomatic engagement between countries.

As Ban Ki-Moon, UN Secretary-General, has said, the UPR ‘has great potential to promote and protect human rights in the darkest corners of the world.’

National Human Rights Institutions are encouraged to be part of the process and provide an independent assessment of the country under review.

The Australian Human Rights Commission has been actively engaged in the UPR process since its inception. We took a key role in bringing government, NGOs and the civil society together ahead of Australia’s first UPR appearance in 2011. For the past four years, we have also published an annual implementation report that reflects on Australia’s progress in addressing the commitments made by the Government in the first cycle review.

This document is the next step in our engagement in this process. Under the rules of engagement for the UPR, national commissions can make a submission to the Office of the High Commissioner for Human Rights for inclusion in what is referred to as the ‘stakeholder report’ for the UPR. This report is a compilation of inputs from a country’s NHRI, as well as NGOs. The compilation report is one of three documents that form the basis of the UPR dialogue.

The submission was developed with input from all state and territory human rights and anti-discrimination commissions.

It describes the current background and framework for human rights in Australia and details what is being achieved ‘on the ground’ for the promotion and protection of human rights. The positive developments that have occurred over the past four years are welcomed: the Australian Government’s continued support of the National Disability Insurance Scheme, the appointment of a full-time Human Rights Commissioner and the launch of a National Action Plan to combat trafficking and slavery.

Substantial weaknesses are evident in Australia’s human rights protections. The implementation of many actions contained in Australia’s National Action Plan on human rights has been limited, and Australia has still not ratified the Optional Protocol to the Convention against Torture. Australia’s policies in relation to refugees and asylum seekers continue to present challenges.

The UPR provides a unique opportunity to reflect on our ambitions for better human rights protection in Australia – by targeting the areas of greatest need and developing a plan for addressing these over the next four years.

It is a positive process aimed at encouraging reflection and debate. I look forward to engaging with government, NGOs and the community as the process unfolds, and as we all strive together to realise human rights in Australia for everyone, everywhere, everyday. 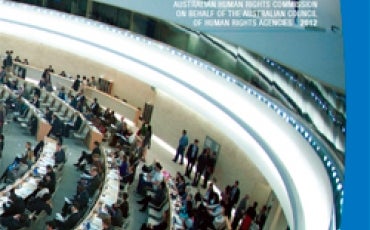