Right to an effective remedy 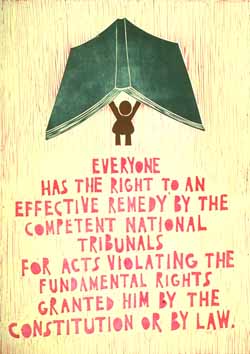 Back to rights and freedoms: Right by right

Even when appropriate legal and other measures to protect and promote human rights are in place, breaches of rights can still occur.The right to an effective remedy is an essential component of human rights under the ICCPR and other human rights instruments.

Each State Party to the present Covenant undertakes:

(a) To ensure that any person whose rights or freedoms as herein recognized are violated shall have an effective remedy, notwithstanding that the violation has been committed by persons acting in an official capacity;

(b) To ensure that any person claiming such a remedy shall have his right thereto determined by competent judicial, administrative or legislative authorities, or by any other competent authority provided for by the legal system of the State, and to develop the possibilities of judicial remedy;

(c) To ensure that the competent authorities shall enforce such remedies when granted.

As well as noting the importance of judicial and administrative remedies, the Human Rights Committee has noted