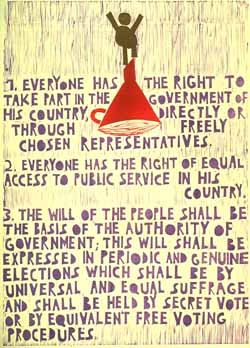 Every citizen shall have the right and the opportunity, without any of the distinctions mentioned in article 2 and without unreasonable restrictions:

The Human Rights Committee's  General Comment No. 25: The right to participate in public affairs, voting rights and the right of equal access to public service is reproduced in full below. It emphasises the relationship between the rights recognised in Article 25 and other rights,  including

Although the Constitution does not contain an express statement equivalent to the full extent of rights recognised in ICCPR Article 25, the High Court has found a degree of implied Constituional protection. In particular, similarly to the Human Rights Committee, the High Court has emphasised the connection between the rights recognised in Article 25 and the rights to freedom of association and expression.

In a passage from Archibald Cox's text [The Court and the Constitution (1987) at 212], to which Mason CJ referred in ACTV[, it was said that: "Only by uninhibited publication can the flow of information be secured and the people informed ... Only by freedom of speech ... and of association can people build and assert political power".