Rights to equality and non discrimination

Back to Rights and freedoms: right by right 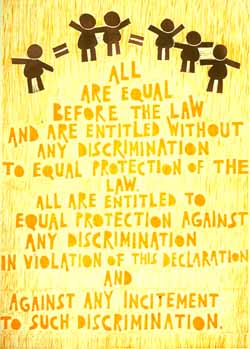 Introduction | What are Australia's obligations? | What does discrimination mean? | What grounds of discrimination are covered? | International scrutiny | Commission work | More information | Comments

Non-discrimination and equality rights are central features of the major human rights treaties.

Rights of equality and non-discrimination are contained in

The main ICCPR provisions are as follows:

What are Australia's obligations?

The right to equality and non-discrimination includes both positive and negative obligations.  Australia's international obligations in this area require that

Article 2.1 of the ICCPR

Article 26 on equal protection of the law

What does discrimination mean?

Not all different treatment is discrimination | Special measures

The ICCPR itself does not provide a definition of discrimination. However, the Human Rights Committee in its General Comment 18 on Non-Discrimination has advised as follows:

... the Committee believes that the term "discrimination" as used in the Covenant should be understood to imply any distinction, exclusion, restriction or preference which is based on any ground such as race, colour, sex, language, religion, political or other opinion, national or social origin, property, birth or other status, and which has the purpose or effect of nullifying or impairing the recognition, enjoyment or exercise by all persons, on an equal footing, of all rights and freedoms.

This closely reflects the definitions of discrimination which are provided in CERD Article 1.1, CEDAW Article 1, and CRPD Article 2.

Not all different treatment is discrimination

Not all different treatment amounts to discrimination under the human rights treaties.

In particular, several of the Conventions on the rights of specific groups recognise the principle that some different treatment can be legitimate and necessary, by providing that "special measures" to promote equal enjoyment of human rights by these groups are not discriminatory.

These provisions provide confirmation of what discrimination means in international law, rather than being exceptions.

What grounds of discrimination are covered?

ICCPR article 2.1 refers to discrimination "of any kind".  It goes on to list grounds "such as"

ICESCR Article 2 provides a similar list to that in the ICCPR.

Some of these grounds have subsequently been expressly included in Australia's obligations through other human rights treaties.

Grounds specified by the Discrimination (Employment and Occupation) Convention (ILO 111)

Discrimination in employment is prohibited by the International Labour Organisation's  Discrimination (Employment and Occupation) Convention (ILO 111), which was ratified by Australia in 1973. Under this Convention, Australia is required to take steps to remove  employment-related discrimination on the grounds of race; colour; sex; religion; political opinion; national extraction, or social origin.

Each of these grounds of discrimination is expressly covered by the ICCPR.

Parties to the Convention are also able (under Article 1(b) to add grounds to their own obligations. In 1989 Australia added the grounds of age; medical record; criminal record; impairment; marital status; mental, intellectual or psychiatric disability; nationality; physical disability; sexual preference, and trade union activity.

Most or all of these additional grounds are likely to be covered by the ICCPR and ICESCR as discussed above.

Complaints about grounds of employment discrimination covered by ILO 111

The Commission can receive complaints of employment discrimination on any of the grounds covered by ILO 111 as it applies to Australia. However, enforceable remedies under the legislatiion administered though the Commission are at present only available for some of these grounds.

Complaints about most of these other grounds of discrimination covered by ILO 111 can however be made to the Fair Work Ombudsman and most State and Territory anti dicrimination and equal opportunity bodies.

The Committee found (PDF) that Mr Young had been discriminated against under Article 26 of the ICCPR and was entitled to an effective remedy, including the reconsideration of his pension application. Australia argued that Mr Young had not exhausted domestic remedies as he had not pursued his claim through the AAT or the courts. The Committee rejected this argument, noting that Australia had no court or tribunal with the capacity to overturn legislation on the grounds of it being in breach of human rights. The Committee reaffirmed its view that Article 26 includes discrimination on grounds of sexual orientation. The Committee noted that the State party [Australia] is obliged to ensure that similar violations of the Covenant do not occur in the future.