The UPR is a unique process that involves the regular review of the human rights situation in each country in the world. The UPR provides two major opportunities for Australia:

What is the United Nations Universal Periodic Review?

The UPR was introduced in 2006 as part of major reforms of the United Nations human rights system. The UPR Working Group is an important part of the UN Human Rights Council, which is a central human rights body in the UN system.

This happens by each country explaining to other governments how it is progressing on protecting human rights at home. Each country has an opportunity to explain actions it has already taken and what actions it plans to take to improve human rights in that country and fulfil its international human rights obligations.

The process also includes an opportunity to share best human rights practices around the globe. Currently, no other mechanism of this kind exists.

The UPR is designed to ensure every country’s human rights situation is assessed in an equal way by the Human Rights Council.

How often will Australia go through the UPR process?

Currently, every country in the world appears before the UPR every four years.

The UPR is not a one off process. It forms the basis for an ongoing dialogue among countries about human rights. When a country has been considered under the UPR, its government must accept or reject recommendations made by other countries to improve their human rights situation. When the country appears before the UPR on the next occasion, it must explain how it has met the recommendations it accepted at the earlier review as well as any other improvements it has made to human rights protection in the country.

What human rights issues may be considered in the UPR?

The UPR is a review of each country’s human rights record. It assesses the extent to which governments respect human rights including their obligations as set out in:

(a) The Charter of the United Nations;

(b) The Universal Declaration of Human Rights;

(c) Human rights instruments to which a country is party (i.e., human rights treaties that have been ratified by the country);

(d) Voluntary pledges and commitments made by countries (which could include national human rights policies and programmes); and

(e) International humanitarian law that applies to the country.

Australia is a party to a number of human rights and humanitarian law treaties. The human rights obligations in the following major treaties could, for example, form part of the UPR assessment of Australia’s performance:

How does the Universal Periodic Review process operate?

There are five stages in the UPR process. These processes, as they apply to Australia, are summarised in the diagram below and more fully described in the following text. 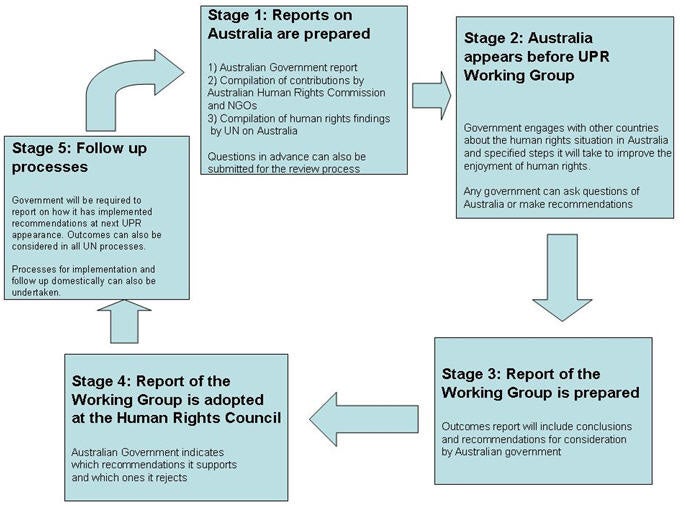 Stage 1: Three documents about Australia are prepared in advance

For every country in the world, the review is based on three documents submitted in advance of the session. As far as Australia is concerned, this means:

The actual review takes place in Geneva in the ‘UPR Working Group’. The review consists of three hours of questions and answers between the Australian Government and other countries.

In advance of the session, any country can submit any questions that they wish to make about Australia. This gives the Australian Government time to prepare responses in advance.

Advance questions and recommendations are provided to the ‘troika’ for the country. The troika is made up of three rapporteurs who are assigned to facilitate the review process for a country. Troika members are selected from countries that are members of the Human Rights Council.[2] The troika for Australia's appearance in November 2015 was Japan, Germany and Namibia.

During the session, the Australian Government introduces its report and discusses issues including:

The Australian Government also responds to questions or recommendations that were provided in advance.

A practice has emerged whereby some countries include in their initial presentation before the Working Group voluntary pledges and commitments about actions they intend to take to better protect human rights back home.

Any country in the world can then ask questions and suggest recommendations to the country under review in the remaining time.

The UN provides a webcast of each UPR session, which can be accessed at: http://webtv.un.org/.

An Outcomes Report, known as the Report of the Working Group, is then finalised approximately (but not sooner than) 48 hours after the review has occurred. The report is prepared by the troika of country rapporteurs, in consultation with the Australian Government, and with the assistance of the Office of the High Commissioner for Human Rights.

The Outcomes Report summarises the discussions at the UPR Working Group session and sets out recommendations made during the review, the responses to these by the Australian Government, and any voluntary commitments made by Australia.

The Outcomes Report is then formally presented to the UPR Working Group during that session, with half an hour for discussion.

The UPR Outcomes report on Australia then has to be adopted formally at a plenary session of the Human Rights Council. The adoption of an Outcome Report usually occurs 1-3 months after the UPR Working Group session.

During the Human Rights Council’s plenary session, Australia will have an opportunity to reply to questions and issues that were not sufficiently addressed during the Working Group session.

Australia alsos submits an addendum to the UPR Outcomes report in which it responds to every recommendation made during the review. The addendum report indicates which recommendations Australia will accept (adopt and implement) and which ones it will note (reject and give reasons why).

During that plenary session, any other country has the opportunity to express their opinion on the outcome of Australia’s review. Similarly, the Australian Human Rights Commission, NGOs and other stakeholders may also make general comments about the Outcomes Report on Australia.

The UPR recurs on a four-and-a-half year cycle. Australia will most likely appear before the UPR for a third time in 2020. At that time, the Government will be held to account for how it has implemented the recommendations that it accepted from the initial reviews and will also be expected to address human rights issues that have emerged in the meantime.

The outcomes of the UPR review are also likely to be considered in other UN processes, such as when Australia appears before human rights treaty committees.

The government can also make progress reports to the Human Rights Council on how it is implementing the UPR outcomes whenever it chooses.

The government has stated that it will develop a mechanism to monitor implementation of the accepted UPR 2nd cycle accepted recommendations.

What is the role of the Australian Human Rights Commission in the UPR process?

As with all processes of the UN Human Rights Council, there is a recognised role for national human rights institutions in the UPR process.

The Commission is recognised as an ‘A status’ national human rights institution, because it operates in full compliance with the Paris Principles relating to the Status and Functions of National Institutions for the Promotion and Protection of Human Rights. These principles, established by the General Assembly of the United Nations, set out the minimum standards required by national human rights institutions to fulfil their role effectively.[3]

National institutions with ‘A status’ can contribute a report with a limited word count (2815 for 2nd cycle review) to the UN Office of the High Commissioner for Human Rights for inclusion in the ‘stakeholder report’ that is prepared in advance of the country appearance under the UPR. The Commission lodged its report with the UN in March 2015 click here to access.

After the first UPR, the Commission, together with the Australian Council of Human Rights Agencies (ACHRA), developed annual progress reports to the Human Rights Council to reflect positive developments as well as concerns about lack of progress in implementation. Click here to access.

Following the second UPR, the government has made a commitment to work with the Commission, to develop a public and accessible process for monitoring progress against UPR recommendations including a a periodic statement.

How can NGOs contribute to the UPR for Australia?

Any NGO may submit information which can be added to the ‘other stakeholders’ report which is considered during the review. Submissions can be made individually or jointly with other NGOs. As the practice is for all NGO contributions to be summarised down to a total of 5 pages submissions should be succinct.

A coalition of NGOs formed to prepare a joint submission for the 2nd Cycle Review and to also contribute comments to the Government’s report. The joint submission was lodged in March 2015 and can be accessed here: http://hrlc.org.au/upr/

The contacts for this NGO coalition are:

NGOs can choose to submit their own information to the United Nations or to engage in the Government process separately from any NGO coalition.

Following on from UPR, the Government has committed to developing a public process for monitoring the implementation of UPR recommendations.

What type of information will be considered as part of the UPR on Australia?

There are technical guidelines that set out the information that will be considered as part of the UPR process.

All submissions that are made are loaded to the UN website and can be viewed and considered in their totality. However, all submissions by NGOs will still be summarised down to a total of five pages in the final formal report.

The Australian Government report, as well as submissions from the Australian Human Rights Commission and NGOs, should be prepared in accordance with the following guidelines:

(a) Description of the methodology and broad consultation process undertaken.

(b) Background and framework for promotion and protection of human rights, (constitution, legislation, policy measures, national jurisprudence, human rights infrastructure, and the international obligations identified in the basis of review).

(c) Promotion and protection of human rights on the ground, including the progress on implementation of the international human rights obligations.

(f) Expectations for the country in terms of capacity building, and if requested technical assistance.

All submissions should also only refer to events of the past 4 years.

The full guidelines on documentation can be viewed at: http://www.ohchr.org/EN/HRBodies/UPR/Pages/NgosNhris.aspx

What was the timeline for Australia’s 2nd Cycle UPR appearance?

The following table provides the timeline of the steps leading up to and following the UPR review of Australia.

How do I get more information about the UPR?

The official United Nations documents that set the rules and guidance for the UPR process are available online at: http://www.ohchr.org/EN/HRBodies/UPR/Pages/BackgroundDocuments.aspx

The UN Office of the High Commissioner for Human Rights has also produced the following publication, which has a detailed consideration of the UPR process:

There are also many NGOs across the world that have prepared guides to the UPR process. The following provides greater detail on the UPR process and the practical considerations that ought to be taken into account when preparing submissions to the UN for the UPR process:

Who do I contact for further information on the preparation of reports for the Australian UPR?

The following people and organisations are the relevant contacts for the preparation of the reports and contributions of the Australian government and at the Australian Human Rights Commission:

The UPR was established when the UN Human Rights Council was created on 15 March 2006 by the UN General Assembly in Resolution 60/251. This mandated the Council to:

‘undertake a universal periodic review, based on objective and reliable information, of the fulfilment by each State of its human rights obligations and commitments in a manner which ensures universality of coverage and equal treatment with respect to all States’.

The universal periodic review should:

The objectives of the review are:

[1] Australia is also a party to a number of other treaties which could also be considered in the UPR review.
[2] The process for selecting the troika is contained in Human Rights Council Resolution 5/1, paras 18 – 20: http://ap.ohchr.org/documents/E/HRC/resolutions/A_HRC_RES_5_1.doc.
[3] UN General Assembly Resolution 48/134 of 20 December 1993. See further: http://www.asiapacificforum.net/members/international-standards.