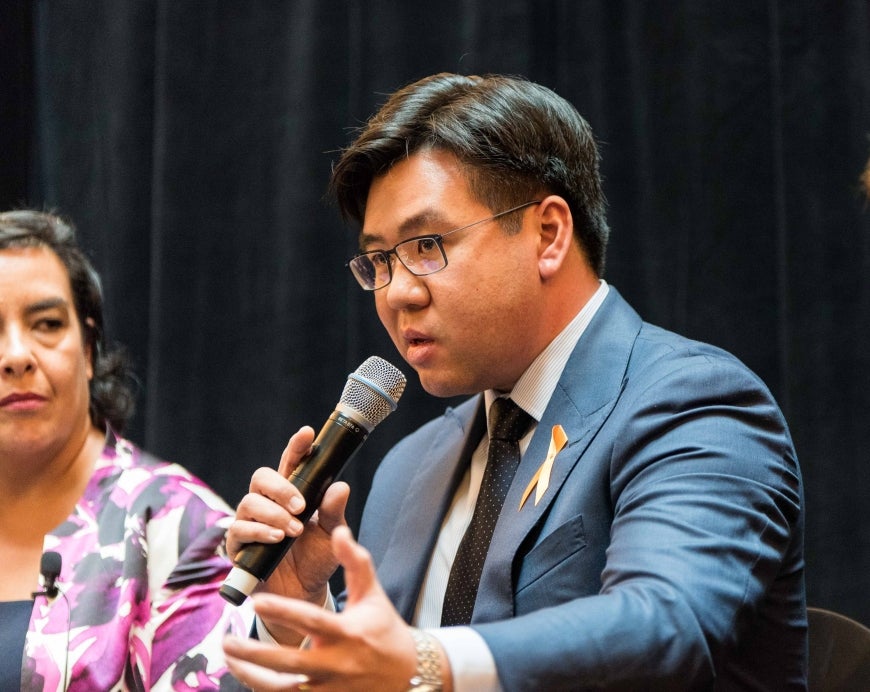 It is not in the national interest for politicians to give licence to prejudice, writes Australia's Race Discrimination Commissioner, Tim Soutphommasane.

The more things change, the more they stay the same. That’s the feeling you get sometimes about race and political debate.

In her maiden speech to Parliament in 1996, Pauline Hanson warned that Australia was being ‘swamped by Asians’, and called for multiculturalism to be abolished. This week, Ms Hanson again claimed the country is being swamped by Asians. Her One Nation Party has also made it part of its platform to abolish the Racial Discrimination Act, impose a ban on new mosques, and have a royal commission into Islam.

Apart from the new emphasis on Islam, the politics of Hansonism haven’t changed during the past two decades. By contrast, Australian society has moved on. We have grown even more diverse. Close to half of our population is first- or second-generation Australian. The largest source countries of immigration are now China and India.

Moreover, multiculturalism enjoys robust public support. Surveys show that about 86 per cent of Australians believe it is good for the country. The vast majority of us are relaxed and comfortable about leaving room for diversity in our national identity.

There is, of course, a small but vocal minority of our society that is anything but relaxed and comfortable. Some are fearful and anxious about cultural change. Sometimes, racism can play a part in forming or expressing these concerns.

We should be clear about a few things. It’s important that we are able to have debates about multiculturalism and immigration. In a democracy, no issue is ever beyond discussion.

But the manner in which we conduct debates matter. Citizens should be civil and respectful. Arguments should be grounded in facts and reason. Passions and emotions must never spill over into violence.

The recent experience of the United States and Britain demonstrate exactly what can happen when politicians appeal to xenophobia. Consider the violence seen at rallies in support of Donald Trump. Or consider the murder of British parliamentarian Jo Cox in the lead-up to the Brexit vote (which has since unleashed a spike in racist attacks).

Rhetoric isn’t just rhetoric. It has consequences. If you constantly tell people that things are at breaking point, or that some groups are criminals and terrorists, don’t be surprised if people start taking you at your word.

This goes to one responsibility that our political leaders must fulfil. It isn’t in the national interest for politicians to give licence to prejudice.

There is a grave cost when they lapse. Groups and communities can be singled out. Back in the 1990s, it was those of Asian backgrounds who were susceptible. Today, it is Muslim Australians who are frequently labelled as a public threat (though Asian Australians aren’t yet off the hook).

Liberal democracies must take their values seriously. Every member of our society should be free to live without fear of discrimination. This includes being free to practise their religion, as guaranteed by section 116 of the Australian Constitution.

For friends of decency, taking our values seriously means fighting any resurgent intolerance. It means confronting racism and bigotry.

People can be admittedly reluctant to do so. No one these days wants to be accused of being “politically correct” about race. People can be cowed into silence or into turning a blind eye.

But we shouldn’t be apologetic about responding to ignorance or nastiness. Yes, everyone is free to have an opinion. But having an opinion doesn’t mean that others must agree with you. Those who invoke freedom of speech shouldn’t complain when others exercise the same freedom.

Indeed, calling out racism or bigotry doesn’t mean that you are preventing someone from having an opinion. It just means that you are holding them to account for what they say. If people don’t want to be called a racist or a bigot, they can start by not expressing a racist or bigoted opinion.

Which brings us to how we define racism and bigotry today. Some believe something is only truly racist if it involves a belief in racial superiority or is motivated by malice. Anti-Muslim hostility, meanwhile, is frequently excused on the grounds that “Islam is not a race”.

We can dispense with both excuses. The first overlooks how racism is as much about impact as it is about intention. You don’t need malice in order to vilify or discriminate. Lazy stereotypes and casual exclusion can also cause harm. Sometimes ignorance or arrogance is all that it takes.

As for Islam not being a race? That’s a clever trick – one that ignores how anti-Muslim feeling can involve a mingling of ideas about race, culture and religion. Whatever its nuance, religious bigotry does little to aid racial tolerance and harmony.

Elections often give countries a chance to measure their social progress. So far after this election, we have seen some early signs of the racial ugliness and social division that erupted twenty years ago.

This opinion piece was first published on 5 July 2016 by Fairfax Media.