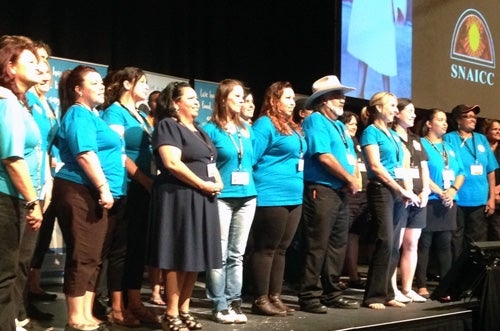 I would like to thank SNAICC for inviting me to speak at this opening plenary session of SNAICC’s 5th Conference. I am honoured to be sharing the session with Marta Mauras Perez, and Cindy Blackstock, who have a wealth of experience working to protect children’s rights internationally.

I would like to acknowledge the traditional custodians, the Gimuy Yidinji[1] people, on whose land we gather today.

For our Children: Living and Learning Together.

The name of this conference has a particular resonance for me. It is vitally important for me, in my new role as National Children’s Commissioner, to ‘listen and learn’ about the lives, hopes and dreams of Aboriginal and Torres Strait Islander children.

As National Children’s Commissioner, I also see my key role as acting as a national advocate for the rights and interests of all children in Australia, no matter who you are, where you come from; how old you are or where you live.

The Australian Human Rights Commission legislation which governs my work also requires me to give particular attention to children who are at risk or vulnerable. In this context, the UN Committee on the Rights of the Child in its Concluding Observations on Australia last year identified Aboriginal and Torres Strait Islander children as one of the groups needing particular attention.

And for good reason.

While there have been improvements in some areas - and certainly there will be lots of positive stories at this conference - the disparities between Aboriginal and Torres Strait Islander and non-Indigenous child development is of significant concern.

2. Some disparities between Aboriginal and Torres Strait Islander children and non-Indigenous children

Babies of Aboriginal and Torres Strait Islander mothers are twice as likely as those born to non-Indigenous mothers to be of low birth weight.[2]

While it is pleasing to see under-five mortality rates starting to fall[3], 2008–2010 figures show that infant mortality rates were 1.7 times as high for Aboriginal and Torres Strait Islander infants compared with non-Indigenous infants.[4]

Young Aboriginal Torres Strait Islander young people 15-19 years old are more likely to die by suicide than other young Australians.[5] And while youth suicide rates nationally have been slowly decreasing since 1997, there has been a dramatic and confronting increase in the rates of youth suicide in places like the Northern Territory. For example, between 2006 and 2010, the rate of suicide for Aboriginal and Torres Strait Islander young people aged 10-17 increased 160%. The levels of self-harm and attempted suicide are even greater, although accurate evidence is hard to find as many young people who self-harm do not present to hospitals.[6]

Only on Friday, Helen Christensen, Executive Director of the Black Dog Institute, warned that action must be taken to curb the rising rate of suicide attempts among girls and women, particularly in WA's indigenous communities, that while the suicide rate was higher among men, many more women attempted suicide. Almost twice as many women as men attempted suicide over a 12 month period, with the most recent Australian Bureau of Statistics national survey of mental health and wellbeing revealing 22,600 men attempted suicide in 2007, compared with 42,700 women.
Professor Christensen said there was an increased rate of suicide attempts among girls, particularly in indigenous communities. She said "There is a real role in the future to look at how we get to girls who are making the attempts. They are really unhappy, not coping and finding life very difficult[7].

I particularly commend the government for announcing a new National Strategy to the tune of $17.8 million over four years, for suicide prevention measures aimed at Aboriginal and Torres Strait Islander people.

In education, there have been some recent improvements in both attendance and literacy and numeracy indicators recently. And ABS data on schools released in March 2013 shows some modest improvements in high school retention rates.[8]

But it remains the fact that school attendance rates are generally lower among Aboriginal and Torres Strait Islander students than among non-Indigenous students by 3 to 10 percentage points.[9]

66% of Year 5 Aboriginal and Torres Strait Islander students in 2011 achieved the minimum reading standards compared to 93% of non-Indigenous, with 75% achieving numeracy standards, compared with 96% of Non-Indigenous students.[10]

According to the Australian Institute of Health and Welfare, Aboriginal and Torres Strait Islander children aged 10-17 years were 31 times as likely as non-Indigenous young people to be in detention on an average night in 2012, up from 27 times as likely in 2008. That is, 1 in every 217 Aboriginal and Torres Strait Islander young people aged 10-17.[13]

These figures are not new, and point to the many challenges for ensuring the enjoyment of rights of Aboriginal and Torres Strait Islander children and young people, in particular their rights to health, education, safety and protection.

Last year, the UN Committee on the Rights of the Child acknowledged that despite the numerous measures taken by Australia, it ‘remained concerned about the overall situation of indigenous Australians, especially with regard to their health, education, housing, employment and standard of living’.

3. Some opportunities to address the needs of children

There is no doubt that improving the well-being and rights of Aboriginal and Torres Strait Islander children should continue to be a national priority.

It is positive that the Government has made an ongoing commitment to the overarching strategy of Closing the Gap and that this is also now reflected in the Second Action Plan of the National Framework for Protecting Australia’s Children, which seeks to bring down the overrepresentation of Aboriginal and Torres Strait Islander children in child protection systems.

In this context, there are many opportunities to positively support communities to address the needs of children and young people, and to look for holistic and preventive ways to do so, so that they are diverted from costly and largely ineffective systems.

I have been pleased to be able to join forces with Mick Gooda, the Aboriginal and Torres Strait Islander Social Justice Commissioner, in promoting a justice reinvestment strategy. The idea is that a portion of the public funds that would have been spent on covering the costs of law and order, imprisonment and care in communities that have a high concentration of offenders, is instead invested in community programs, services and activities that are aimed at addressing the underlying causes of crime, dislocation and disengagement in those communities.

This approach represents a much better investment in our children by diverting them from the criminal justice and care systems in the first place. And spending money on preventive programs that get to the root of the problem.

Last year Mick used the example of Texas, where $1.8 billion was saved over five years by targeting five communities and reinvesting the money that would have been spent on prisons into substance abuse services and early intervention in the health of infants. Two years after the introduction of justice reinvestment strategies the growth in imprisonment was halted in Texas for the first time in years with further reductions expected.

I recently went to Bourke in NSW with Mick by invitation of the community to discuss the possibilities of a justice reinvestment approach with the community, including with a number of children and young people.

Despite their struggles to stay in school, and stay out of trouble, they were also deeply motivated to get a job and do well in life. They also told me that they want to be respected and treated equally, and not be discriminated against. They identified boredom as an issue and made practical suggestions such as the need for:

I was very impressed by their very practical suggestions for investing in more community activities for children and young people. One of the elders at the forum specifically acknowledged the presence of the young people and noted how pleased she was that they were engaged. We need to follow up and keep them engaged and empower these and other young people in the community to get involved and have their say.

One of the other concerns about Australia raised by the UN Committee in its Concluding Observations was on child participation, something which I know Cindy is talking about here at this conference.

Article 12 of the Convention on the Rights of the Child states that a child has the right to have their views respected. And to have a say in decisions which affect them.

The UN Committee noted that Australia does not have adequate ways of taking into account the views of children under the age of 15, and Aboriginal and Torres Strait Islander children in particular.

And it is inspiring to see so many children and young people taking part in this conference. I was lucky enough meet some young people last night.

But I think we can do much better.

I believe listening to children and taking their views into account in decisions which affect them should be integrated systematically into the work of government and non-government organisations.

It’s not just because the UN Committee tells us to do it – it’s because children are the experts in their own lives.

And if we listen to them, I believe we understand more clearly what needs to be done and get much more effective outcomes.

I am calling this process The Big Banter!

To do this, I plan to visit city and country areas in each state and territory over the next few months and hold targeted focus groups with children, children’s advocates and with government.

I am especially interested in speaking with as diverse groups of children as possible, and their advocates. And I am hoping that I can hear from Aboriginal and Torres Strait Islander children and young people while I am here in Cairns, and at other places I will visit during the next few months.

Of course, I will not be able to visit all areas and speak to all groups of children and their advocates. That is not humanly possible, nor do I have resources to do so.
But I welcome any assistance from children’s organisations, in facilitating focus groups with children or meetings with child advocates, or simply letting people know that I am officially ‘Listening’!

I am also launching, as of today, an online survey and storytelling site for The Big Banter, so that I can hear the views of children and young people who don’t get a chance to speak to me in person.

I believe that every child and young person has something to tell me about how children’s lives can be improved.

You can get to the survey and the storytelling site through our Australian Human Rights Commission website at somethingincommon.gov.au/thebigbanter. If you fill out the survey or upload your story, you go in the running to win a prize!

So please, let children and young people know that I would love to hear from them, and I am genuinely seeking their help in making sure that I can work for their rights as best I can.

[1] Pronounced ‘Gimoy Yidingee’.
[2] 12% compared with 5.9% respectively.
[3] Close the Gap Campaign Steering Committee, Close the Gap Shadow Report 2013, pp 15-17.
[4] Australian Institute of Health and Welfare (AIHW) - A Picture of Australia’s Children 2012.
[5] Australian Bureau of Statistics. (2013). Causes of Death, Australia, 2011. Catalogue No. 3303.0. Belconnen, ACT: Commonwealth of Australia. Accessed March 15, 2013 from http://www.abs.gov.au/AUSSTATS/abs@.nsf/mf/3303.0/ and cited in Mindframe, Facts and stats about suicide in Australia, at http://www.mindframe-media.info/for-media/reporting-suicide/facts-and-stats. The rates for young men are 4.4 times, and for young women 5.9 times, that of non-Indigenous.
[6] Gone too soon: A report into youth suicide in the Northern Territory, Select Committee on Youth Suicides in the NT, March 2012, p 14. In the period 2005-06, self harm hospitalisation rates were almost twice as high among young Aboriginal and Torres Strait Islanders compared to other young Australians.
[7] Suicide bids 'on the rise' Angela Pownall, The West Australian May 31, 2013.