Most children in Australia grow up in a safe, healthy and positive environment. 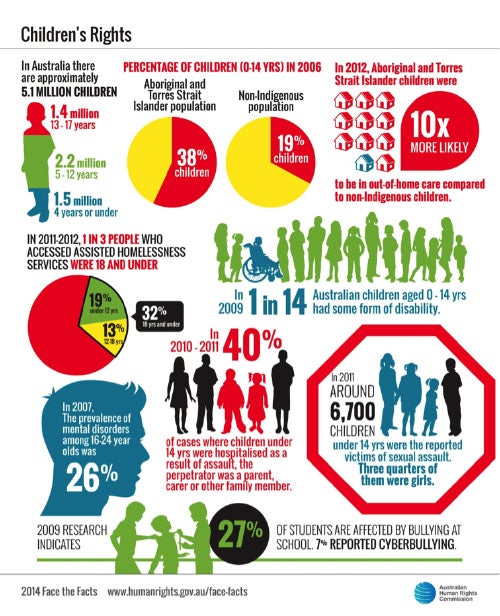 Broadly speaking, children in Australia have access to high-quality schools and health services. Most live in safe and nurturing homes, where they can pursue their interests, be involved in their communities and plan for their futures.

However, twenty years after Australia signed the Convention on the Rights of the Child, there are still vulnerable groups of children and young people who are at risk of being left behind or falling through the cracks.

Key issues for children and their rights

Over 60 per cent of children and young people who took part in a survey by the Australian Human Rights Commission said they did not know or were unaware that they had special rights.[27]

In 2013, a National Children's Commissioner was appointed to the Australian Human Rights Commission.

A key role of the Commissioner is to monitor and report annually on the status of children’s rights in Australia and to make recommendations to ensure that children can enjoy their rights.

The Commissioner also promotes community awareness and discussion of children’s rights; undertakes research and educational programs; and can examine and make recommendations on new and existing Commonwealth laws to ensure that the rights of children are respected.

To do this work, the Commissioner consults with children and children’s advocates.