Australia is a vibrant, multicultural country. We are home to the world’s oldest continuous cultures, as well as Australians who identify with more than 270 ancestries. Since 1945, almost seven million people have migrated to Australia. 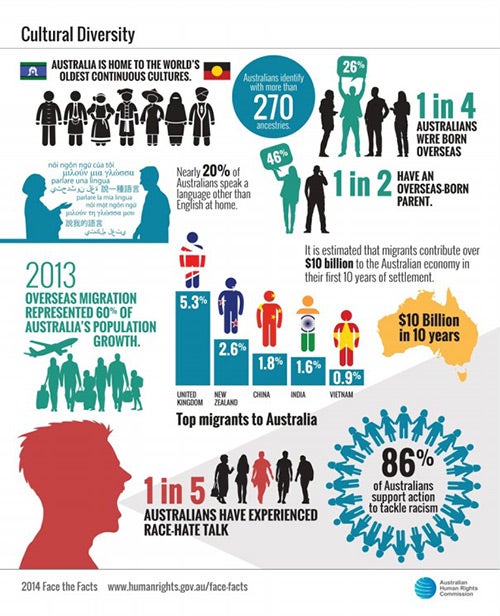 This rich, cultural diversity is one of our greatest strengths. It is central to our national identity.

In 1995, the Act was extended to make public acts of racial hatred against the law. Today, the Act continues to send a strong message about our common commitment to racial equality and the importance of a fair go for all.

Despite this legal protection, too many people in Australia continue to experience prejudice and unfair treatment because of how they look or where they come from.

About cultural diversity in Australia

The Commission helps people resolve complaints of discrimination under the Racial Discrimination Act. The Act protects people across Australia from unfair treatment on the basis of their race, colour, descent, or national or ethnic origin. It also makes racial vilification against the law.

The Race Discrimination Commissioner undertakes a wide range of activities to address racism and racial discrimination, which includes implementing the National Anti-Racism Strategy and coordinating the national anti-racism campaign, Racism. It Stops with Me.