Every day, across the country, older Australians make an enormous contribution to our society. 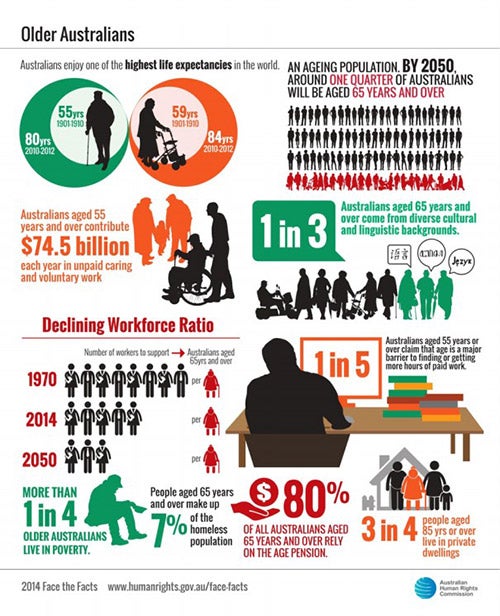 For example, Australians aged 65 years and over contribute almost $39 billion each year in unpaid caring and voluntary work. If the unpaid contribution of those aged 55 to 64 years is included, that figure rises to $74.5 billion per year.[1]

Older Australians should be recognised for their role in building strong and healthy communities.

However, many say that negative attitudes about older people can translate into unfair treatment and social exclusion. Being labelled as “too old” or “past their use-by date” means that some miss out on work, training, study and other opportunities.

In 2004, the Age Discrimination Act came into force. The Act makes it unlawful to treat people unfairly on the basis of their age in different areas of public life. It also highlights the need to tackle the negative stereotypes that can lead to age discrimination.

Over the past two decades, the number of centenarians (people aged 100 years and over) increased by 271%, compared with a 31 per cent increase in the general population over the same period.[21]

Our work, led by the Age Discrimination Commissioner, also includes research, policy advice and education initiatives that tackle community attitudes that can lead to age discrimination.

For example, the Australian Government funded a major research project in 2013 to promote greater awareness of the damaging effects of negative stereotypes around ageing.