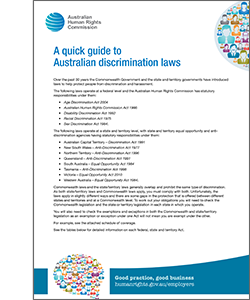 There are federal, state and territory laws in Australia to protect people from discrimination and harassment.

In addition to the federal legislation, each state and territory in Australia has equal opportunity and anti-discrimination agencies, with statutory responsibilities.

Commonwealth laws and the state/territory laws generally overlap. However, the laws apply in different ways and employers must comply with all legislation.

Employers also need to check the exemptions and exceptions in Commonwealth and state or territory legislation. An exemption or exception under one Act does not mean employers are exempt under another Act.