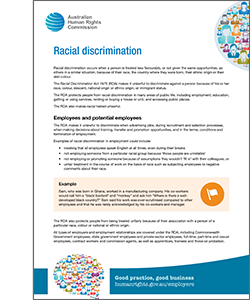 Racial discrimination occurs when a person is treated less favourably, or not given the same opportunities, as others in a similar situation, because of their race, the country where they were born, their ethnic origin or their skin colour.

The Racial Discrimination Act 1975 (RDA) makes it unlawful to discriminate against a person because of his or her race, colour, descent, national origin or ethnic origin, or immigrant status.

The RDA protects people from racial discrimination in many areas of public life, including employment, education, getting or using services, renting or buying a house or unit, and accessing public places.

The RDA makes it unlawful to discriminate when advertising jobs, during recruitment and selection processes, when making decisions about training, transfer and promotion opportunities, and in the terms, conditions and termination of employment.

Examples of racial discrimination in employment could include:

For example, Sam, who was born in Ghana, worked in a manufacturing company. His co-workers would call him a “black bastard” and “monkey” and ask him “Where is there a well-developed black country?” Sam said his work was over-scrutinised compared to other employees and that he was rarely acknowledged by his co-workers and manager.

The RDA also protects people from being treated unfairly because of their association with a person of a particular race, colour or national or ethnic origin.

All types of employers and employment relationships are covered under the RDA, including Commonwealth Government employees, state government employees and private sector employees, full-time, part-time and casual employees, contract workers and commission agents, as well as apprentices, trainees and those on probation.

This means that it is against the law for a provider of goods or services to discriminate against a person by:

because of his or her race.

For example, it would be discriminatory if a real estate agent refused to rent a house to a person because they were of a particular race or skin colour.

Discrimination can be direct or indirect.

Direct discrimination happens when a person is treated less favourably than another person in a similar situation because of his or her race, colour, descent, national or ethnic origin or immigrant status.

For example, it would be direct discrimination if an employer refused to hire a suitably qualified Aboriginal person as a shop assistant and instead hired a less qualified person of a different race because they felt they could lose customers if they had an Aboriginal person working in the shop.

Indirect discrimination can be less obvious. It can happen when employers or service providers put in place conditions, requirements or practices which appear to treat everyone the same but which actually disadvantage some people because of their race, colour, descent, national or ethnic origin or immigrant status. If the requirement is not reasonable in regards to the circumstances of the case, it could be indirect discrimination.

For example, it may be indirect discrimination if a company says that employees must not wear hats or other headwear at work, as this is likely to have an unfair effect on people from certain racial or ethnic backgrounds.

When discrimination is not unlawful

The primary exception in the RDA involves special measures. Special measures have the goal of fostering greater racial equality by assisting groups of people who face, or have faced, entrenched discrimination so they can have similar access to opportunities as others in the community.

It is also possible for an employee to bring a complaint against his or her employer in relation to discrimination on the basis of nationality under the Australian Human Rights Commission Act 1986 – see the fact sheet, Other areas of workplace discrimination.

Complaints of racial discrimination resolved by the Commission

A Greek woman employed by a large company as a travel consultant asked her team leader for leave on a particular Friday for religious and cultural reasons, as Greek Orthodox Good Friday did not coincide with the Easter weekend public holidays. She alleged that her team leader laughed at her request, said ‘You are in Australia and should celebrate Australian Easter’, told her that if she was unhappy about this she should ‘go back to her own country’ and made fun of her surname by calling it 'the alphabet'.

The complaint was resolved through conciliation with the company agreeing to provide the woman with financial compensation, a statement of regret and a statement of service.

A man claimed that a staff member at a supermarket checked his bag on the way out because of his race and skin colour. The supermarket stated that it is a condition of entry that customers may be randomly asked to have their bags checked and that the race or skin colour of customers are not factors in the random selection of customers for bag checks.

The complaint was resolved through conciliation and the man accepted a private statement of regret from the supermarket.

What is racial hatred?

Under the RDA, it is unlawful to do or say something in public that is reasonably likely to offend, insult, humiliate or intimidate a person or group because of their race, colour, or national or ethnic origin.

This behaviour is called racial hatred. 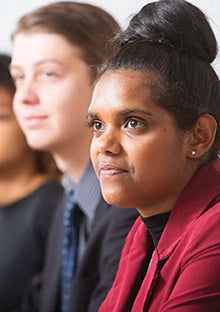 Examples of racial hatred could include:

A person who subjects another person to racially offensive behaviour is primarily responsible for his or her behaviour. However, employers can be held responsible – or vicariously liable – for acts of racial hatred by their employees or agents.

The RDA aims to strike a balance between freedom of speech and the right to live free from racial hatred or vilification.

Complaint of racial hatred resolved by the Commission

Two Nigerian men were employed as factory workers with a manufacturing company. They alleged that their supervisor made racially derogatory comments towards them such as “black idiot”, “you eat like a monkey” and “go back to Africa”. They also alleged that he verbally and physically threatened them.

Employers have a legal responsibility to take all reasonable steps to prevent racial discrimination.

It is against the law to victimise a person for making, or proposing to make, a complaint to the Australian Human Rights Commission about racial discrimination or racial hatred.

Employers can also be held legally responsible for discrimination or harassment by their employees. For more information, see the fact sheet, Vicarious liability.

Racism. It Stops with Me
https://itstopswithme.humanrights.gov.au

Targeted recruitment of Aboriginal and Torres Strait Islander people: A guideline for employers