Race hate and the RDA 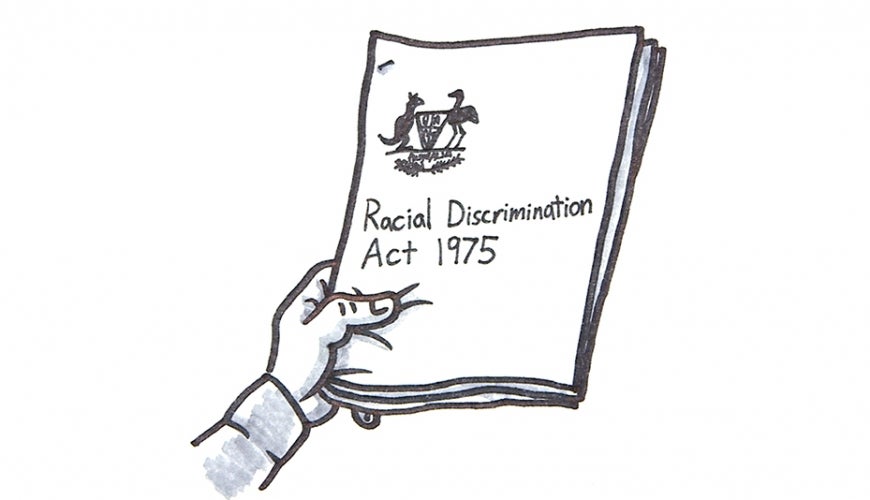 Race hate and the RDA

Racial vilification is dealt with under sections 18C and 18D of the Racial Discrimination Act 1975 (RDA).

Section 18C of the RDA makes it unlawful to 'offend, insult, humiliate or intimidate' someone because of their race or ethnicity.

Exemptions under Section 18D of the RDA ensure that artistic works, scientific and academic inquiry, and fair comment on matters of public interest are exempt from section 18C, provided they are done reasonably and in good faith.

The vast majority of claims under 18C are either conciliated through the Australian Human Rights Commission, or are withdrawn or dismissed. Many cases end with a simple apology. Racial hatred complaints comprise only a fraction of cases under the RDA dealt with by the Commission.

The RDA does not make racial vilification a criminal offence, and offers only a civil remedy. Where a court finds a contravention of the Act, it may make orders for an apology or a correction, and/or award monetary damages.

What is the background to these laws?

Sections 18C and 18D were introduced to the RDA in 1995 in response to recommendations of major inquiries including the National Inquiry into Racist Violence, the Royal Commission into Aboriginal Deaths in Custody, and the Australian Law Reform Commission’s Multiculturalism and the Law report.

These inquiries found that targets of racist violence or harassment had little recourse to existing civil remedies under common law. The introduction of racial vilification provisions reflected a recognition that racial abuse and harassment could escalate to racial violence.

The Australian Human Rights Commission is not a judicial body or a tribunal (*). It does not make judicial determinations about the Act. Its role is to investigate and conciliate complaints.

The Race Discrimination Commissioner plays no role in the investigation or conciliation of complaints, but promotes understanding and acceptance of the Act. The Australian Human Rights Commission President is responsible for final decisions

Each year, the Commission publishes relevant data in its annual reports about the volume and nature of complaints received and resolved.

Walsh v Hanson [2000]. DISMISSED: In 2000, the Commission dismissed a series of complaints alleging racial discrimination following the publication of the book, Pauline Hanson, The Truth, which claimed 'that Aboriginal people were savages who ate babies'. The book’s author was anonymous, but the copyright was owned by Ms Pauline Hanson, an elected politician. The Hon J. A. Nader QC found that by virtue of section 18D of the RDA, the respondents had not acted unlawfully.Read the court documents here: http://www.austlii.edu.au/au/cases/cth/HREOCA/2000/8.html

Jones v Toben [2000]. UPHELD: In 2000, the Commission upheld a complaint against the Adelaide Institute after it published material on its website which appeared to deny the Holocaust. The Institute was represented by Dr Fredrick Toben, who contended that his website was concerned with the extent to which the Holocaust had been 'mythologised'. The complainant said he had received complaints from 'a distressed child of a Holocaust survivor' among others who found the content insulting and derogatory. The Commission ordered the online material be removed and an apology be published. Read the court documents here: http://www.austlii.edu.au/au/cases/cth/HREOCA/2000/39.html

Bropho v HREOC & Anor [2005]. DISMISSED: In 2001, the Commission dismissed a complaint following publication of a cartoon entitled 'Alas Poor Yagan' in The West Australian newspaper. The cartoon depicted Yagan, an ancestor of the Indigenous complainants, who became the subject of legal proceedings to arrange the return of his head from London to Australia. The cartoon depicted the head of Yagan saying 'Crikey, give me a warm beer and a quiet pommy pub any day'. Two appeals to the Federal Court of Australia and the Full Court of the Federal Court of Australia were dismissed. The High Court of Australia dismissed an application for special leave. Read the court documents here: http://www.austlii.edu.au/au/other/HCATrans/2005/9.html

Eatock v Bolt [2011]. UPHELD: In 2011, the Federal Court upheld a complaint against columnist Andrew Bolt and the Herald & Weekly Times. The complainant alleged the articles conveyed offensive messages about fair-skinned Aboriginal people, implying they were not genuinely Aboriginal and were pretending to be Aboriginal in order to access benefits that are available to Aboriginal people. The Federal Court of Australia concluded that the conduct of Mr Bolt and the Herald & Weekly Times was not exempted by section 18D of the RDA because the respondents had not acted reasonably and in good faith. Read the court documents here: http://www.austlii.edu.au/au/cases/cth/FCA/2011/1103.html

Section 18C of the RDA is accompanied by section 18D, which protects any fair comment or reporting on a matter of public interest, and any sentiment expressed ‘in the course of any statement, publication, discussion or debate made or held for any genuine academic, artistic or scientific purpose’. Provided something is done reasonably and in good faith, any fair comment or public discussion will be exempt from being in breach of section 18C. The Racial Discrimination Act is one of the few legislative instruments in Australian law that contains an explicit protection of free speech. It has struck a balance between freedom of expression and freedom from racial vilification. The broad protection of free speech in section 18D means that the law extends to acts that offend, insult, humiliate or intimidate because of race, but which have not been done reasonably or in good faith, or which have not involved a genuine purpose in the public interest.

There have been numerous cases considered by the courts, where something has caused racial offence, insult, humiliation or intimidation, but has been held to enjoy the protection of section 18D. For example, in the case of Bropho, cartoons published in the West Australian, about which Aboriginal people had complained, were deemed to have been artistic work and fair comment enjoying the exemption of section 18D. The section has also prevailed in the Kelly-Country v Beers case involving a satirical performer who purported to be an Aboriginal person called ‘King Billy Coke Bottle’. In that case, the court noted that while the act may have been offensive or insulting, but it fell within the category of artistic work protected by section 18D.

No right or freedom is ever absolute. Where acts impinge upon the rights and freedoms of others, it is only right that we hold it to account. We accept many limitations of what people can say – for example, those imposed by national security laws, defamation laws, trade practices laws, and criminal summary offence laws. Laws against racial vilification reflect our society’s commitment to civility, respect and tolerance.

There are occasions when the President of the Australian Human Rights Commission will terminate complaints that are trivial, misconceived or lacking in substance. The typical cases involving section 18C that courts have considered indicate the kind of racial hatred that attracts the attention of the law. These include cases where Aboriginal people have been described as 'criminal trash' and 'scum' that should be used as landfill (Clarke v Nationwide News), where a man was verbally abused in a building foyer and called a ‘Singaporean prick’ and told to go back to Singapore (Kanapathy v In De Braekt), or where a website published material denying the Holocaust and expressing virulent anti-Semitism (Jones v Toben).

The courts have held that the standard to be met for section 18C to be contravened is conduct that has ‘profound and serious effects’, which are ‘not be liked to mere slights’. The test for whether an act breaches section 18C is also an objective one. The provision makes it unlawful to do an act that is reasonably likely, in all the circumstances, to offend, insult, humiliate or intimidate on the grounds of race and ethnicity. The fact that someone feels they have been racially offended, insulted, intimidated or humiliated is not enough to mean that there has been something unlawful.

Complaints under the RDA: http://www.humanrights.gov.au/complaints/complaint-guides/making-complaint/complaints-under-racial-discrimination-act

Guide to the RDA: http://www.humanrights.gov.au/guide-rda

A history of Section 18C and the Racial Discrimination Act: http://www.sbs.com.au/nitv/article/2016/08/16/history-section-18c-and-racial-discrimination-act