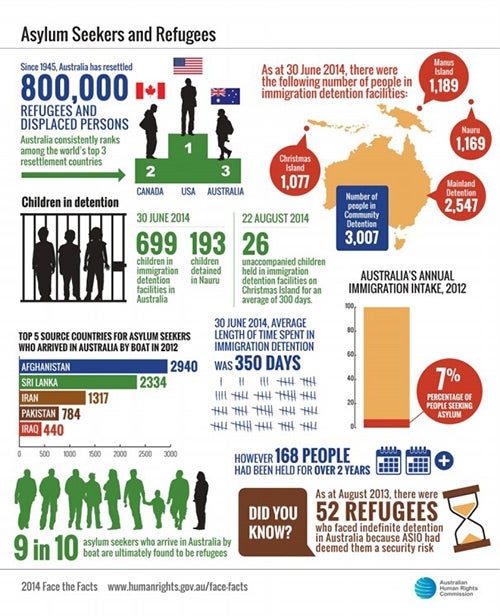 All people are entitled to protection of their human rights, including the right to seek asylum, regardless of how or where they arrive in Australia.

Australia has ratified the Convention Relating to the Status of Refugees 1951. This Convention defines who is a refugee, sets out the basic rights that countries should guarantee to refugees and requires signatories to assess asylum seekers’ claims for protection from persecution.

In 1992, Australia introduced a policy of mandatory immigration detention. Under the Migration Act 1958, any non-citizen who is in Australia without a valid visa must be detained.

In August 2012, Australia introduced “third country” processing. Under this system, asylum seekers who arrive by boat without a valid visa are transferred to and detained in Nauru or Papua New Guinea (PNG), where they will have their claims for protection assessed under Nauruan or PNG law.

The National Children’s Commissioner works collaboratively within the Commission to protect the rights of child asylum seekers and unaccompanied children.

In 2014, the Commission conducted a National Inquiry into Children in Immigration Detention, an investigation aimed at examining the ways in which life in immigration detention affects the health, well-being and development of children. The inquiry sought to determine what changes had taken place in the ten years since the Commission’s 2004 report, A last resort? Report of the National Inquiry into Children in Immigration Detention.