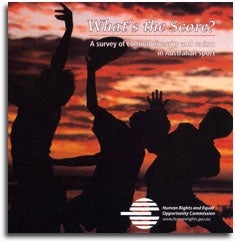 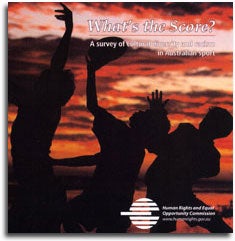 A survey of cultural diversity and racism in Australian sport

What are our national sporting organisations, federal and state government departments, human rights and anti-discrimination agencies and non-government bodies doing to combat racism and prejudice in sport?

And what steps have been taken to develop an inclusive, non-discriminatory culture within sport by players, spectators and the broader viewing public?

To find an answer to this, the Australian Human Rights Commission (the Commission) conducted a national project, funded by the Department of Immigration and Citizenship (DIAC), to survey these different groups to see what strategies and projects have been put in place to achieve these goals.

The project also gathered any available baseline data on the level of participation by culturally and linguistically diverse communities and individuals in sport.

What’s the Score? A survey of cultural diversity and racism in Australian sport is the report from this project. It aims to provide the basis for these organisations to consider future policy strategies aimed at both addressing racism within sport, as well as promoting an inclusive and non-discriminatory attitude by players, supporters and the public.

CD Roms of the report can be ordered from Commission publications at www.humanrights.gov.au/about/publications/index.html or by calling (02) 9284 9600.