OPCAT: Optional Protocol to the Convention against Torture 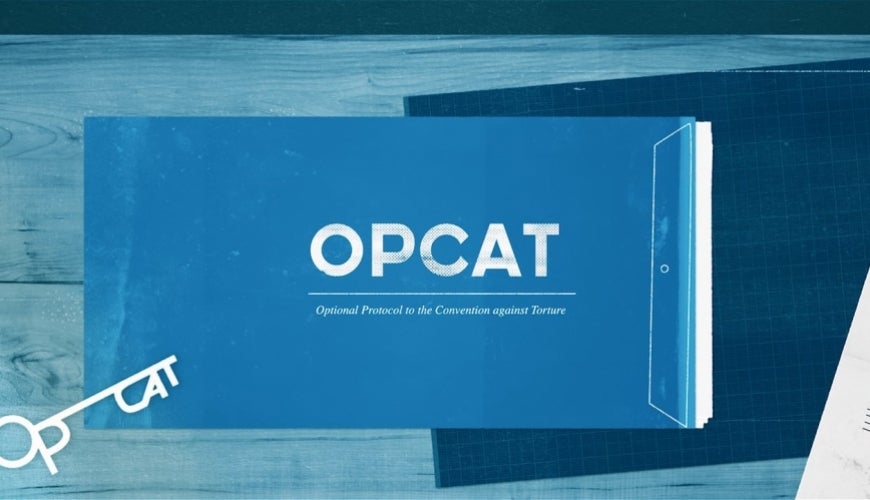 Optional Protocol to the Convention Against Torture and Other Cruel, Inhuman or Degrading Treatment or Punishment (OPCAT)

The Commission has released a report outlining activities required to expedite Australia’s approach to implementing the United Nation’s Optional Protocol to the Convention Against Torture and Other Cruel, Inhuman or Degrading Treatment or Punishment (OPCAT).

Informed by our recent National OPCAT Symposium (see below), the Road Map to OPCAT Compliance provides a clear pathway for governments across Australia to meet the approaching deadline for OPCAT compliance.

Since ratification in 2017, the deadline for Australia’s OPACT implementation process has been extended until 20 January 2023. To meet this deadline, a significant amount of work needs to be finalised to enable relevant authorities to comply with their OPCAT obligations.

The Road Map to OPCAT Compliance report contains key information and principles as well as five recommendations to help guide the implementation process over the next few months.

A copy of the report has been sent to the UN Subcommittee on the Prevention of Torture (UN SPT) as well as individuals, agencies, departments and organisations in Australia which are involved with the OPCAT implementation process.

The release of the report coincides with the visit to Australia by a UN SPT delegation from 16 – 27 October 2022. The UN SPT delegation will provide advice and assistance to help all relevant Australian jurisdictions comply with the OPCAT obligations.

On 9 September 2022, the Commission partnered with the RMIT University College of Business and Law to hold a National OPCAT Symposium in Melbourne. The symposium's aim was to provide an opportunity to bring together relevant stakeholders from the Australian, state and territory governments, oversight and statutory bodies and civil society, to take stock of what has been achieved to date, identify any existing barriers to progress and work out what needs to be done to reach full compliance by the extended deadline of 20 January 2023.

The Symposium successfully brought together just under 200 people from government departments, civil society, and academia. In attendance also were representatives of 43 statutory oversight agencies and commissions of enquiry from across Australia and Aotearoa New Zealand. Watch the National OPCAT Symposium

The overwhelming attitude from those attending the Symposium was that simply ensuring minimal compliance by the deadline would not be enough – instead, Australia should aim to develop best practice in our approach to OPCAT and demonstrate leadership in our implementation of our OPCAT obligations.The Commission published Implementing OPCAT in Australia on 29 June 2020. This was the final paper for the Commission's OPCAT project.

The first phase was completed in 2017. The Commissioner published a consultation paper, received written submissions and held roundtables in Canberra, Sydney, Melbourne, Adelaide and Darwin. The Commissioner summarised these views in an interim report to the Attorney-General in September 2017; the interim report was intended to inform the ratification process.

A second and final phase of consultation was launched on 19 June 2018. Organisations were asked to provide feedback on the proposals contained in the interim report and on the detail of how OPCAT should be implemented in Australia. Roundtables were held in Canberra, Brisbane, Hobart, Melbourne and Perth.

What is OPCAT and what does it require?

Under OPCAT, State Parties agree to establish an independent National Preventive Mechanism (NPM) to conduct inspections of all places of detention and closed environments. In addition to the NPM, State Parties also agree to international inspections of places of detention by the United Nations Subcommittee on the Prevention of Torture (SPT). The SPT engages with states on a confidential basis and cannot publish reports and recommendations unless under agreement with the State Party. Furthermore, people who provide information to the SPT may not be subject to sanctions or reprisals for having done so.

The SPT included Australia in its 2020 schedule of visits; due to the global Covid-19 pandemic, this visit was postponed.

This video created by the Association for the Prevention of Torture provides a useful overview of OPCAT.

What is the status of OPCAT in Australia?

The Commission's work in relation to OPCAT

Following ratification in December 2017, the Australian Government is now in the process of establishing a national system of visits to all places of detention where people are deprived of their liberty. The objective of the Commission's consultation on OPCAT is to feed back the views of stakeholders, primarily civil society organisations, regarding how OPCAT should be implemented in Australia.

The Commission’s Director of Policy and Programs, Darren Dick speaks with Mark Thomson, Secretary-General of the Association for the Prevention of Torture about OPCAT and Australia.

OPCAT and Prevention of Torture